To the Mother of our family who has always been there for us and will always be! We love you. 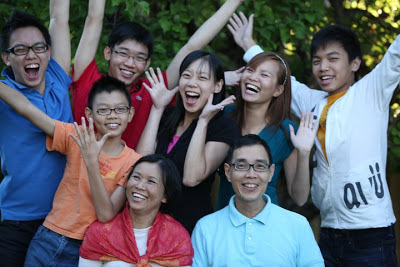 With all of us in USA 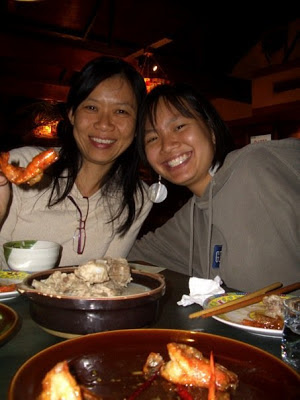 With Fei in Beijing 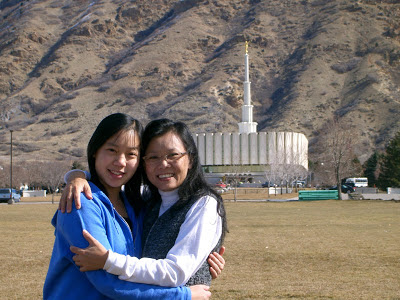 With Su in Provo 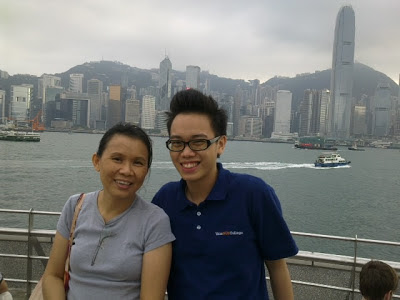 With Han in Hong Kong 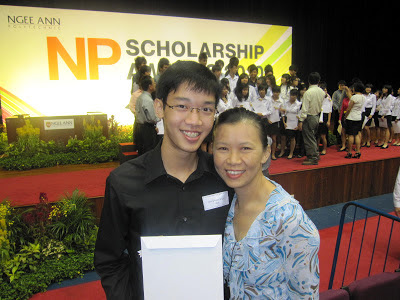 With Shuan in Singapore 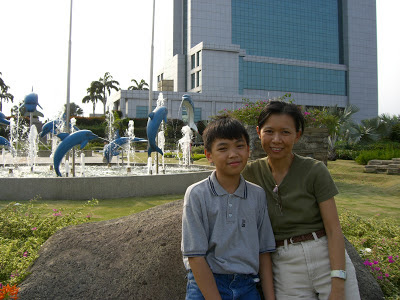 With Ern in Port Klang 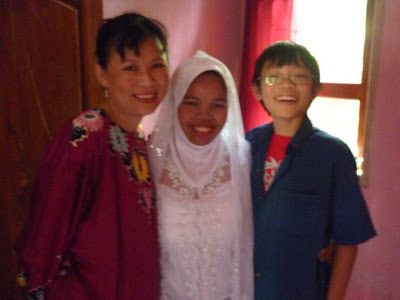 With Ray and Kak Tun in Indonesia 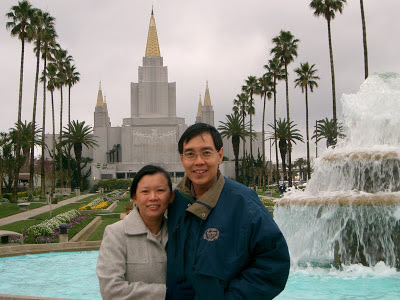 With Dad in Oakland California

Let's sing 'Love at Home' by watching this movie dedicated to Mom! Better still go this link for the music sheet with piano accompaniment.

Sharing my thoughts and feelings

This blog post has been written in the home of my brother in Kuantan. His wife had just returned back to their home in Adelaide so the two of us are bachelor men spending much time together catching up with each other! 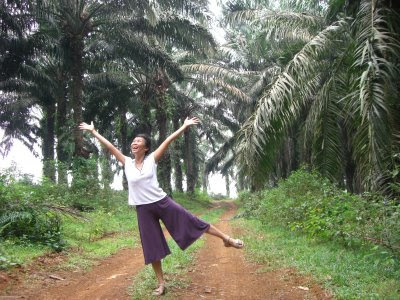 For Mom who returned home to Heavenly Father early, she had always enjoyed being in Kuantan and so do the rest of the family seen in this blog post. You can see and hear mom expressing herself in the video too. 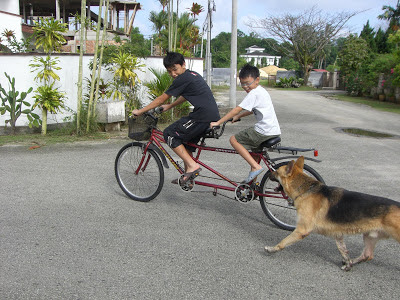 The younger two boys Ern and Ray have their share of fun in Kuantan too as blogged here. 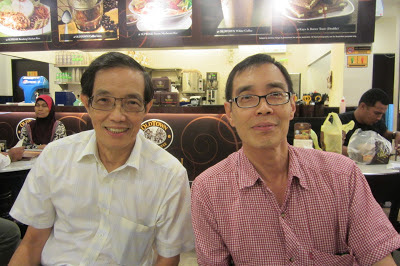 Some friends while in Kuantan recently have said that the two of us brothers look very much alike. This photo was taken when the comment was made as I never thought any of our brothers and sisters look alike unlike some other families so it needs further analysis and feedback!

Anyway driving home from the airport, after dropping his wife, he made a statement that just a couple of days ago, while in Kuala Lumpur I had made to myself.  We both shared a common feeling. He made the statement that at this time of life, with all the technology and knowledge available to us, he felt like it's a prime time to be alive, meaning he felt grateful to be living in this era where we can now do so many many things with what is available to us, referring to hardware such as smart phones, iPads, notebooks, tablets, wifi, video conferencing, digital cameras etc

Now we've both passed the fifty mark and with two older siblings in between us, he being the older brother is much further ahead in age. He also said he knew that technology was something important to acquire in his life but as a busy doctor all these years, he just couldn't catch it. I of course, having been exposed to technology when I did a dual major in accounting and computers in my university days plus diving into the IT business in the early 80s, I not only caught it but could feel very blessed that I have been able to optimize my life using the technology available. You can see in this blog post too how Mom got involved in computers with me in the early days. With the state of art of technology today, I could do business with it, to stay connected with business contacts, friends and family members, make video DVDs, songs and continue to fill my appetite of learning simply because I have a notebook that can be connected to the internet, plus a few other gadgets too of course!

I could understand why my brother found difficulty in catching the technology like many others of the older generation. It's something  that is too fast moving and constantly changing with so many choices that one has to develop an optimal mindset to start off somewhere and then keep up with it as it can be challenging as I have shared in one live experience. It can be difficult but Mr Optimal here never felt any obstacle cannot be overcome and even successfully helped Grandpa to know how to send emails to other family members after I presented a birthday gift of a computer PC to him on his 70th birthday!

Our conversations were free flowing with lots of sharing from both sides, typical of the Chongs I think, and the topic somehow led to women! hahaha 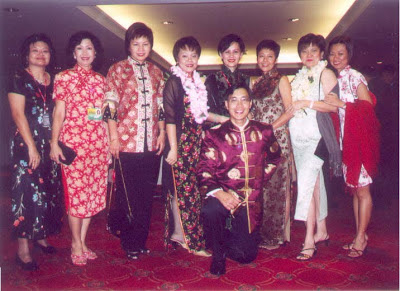 I think it started because I confessed to my brother, since he knew me well up to my teenage years, that I could never understand women nor know much about them in my early adult life. I was focused on my studies and sports in my youth until graduation. Thereafter I embarked on a 2 year voluntary mission for our Church where again women were always kept a distance away by policy. Then immediately after my mission, with just a short courtship with Mom, my first date of 3 months, a decision was made to marry her as explained here.

It somehow triggered my brother to relate challenges about how he tries to use logic to his wife and so I was prompted to  inform him that I had embarked on a personal research to try to understand women better and succeeded. It was interesting that when I told him I read a book entitled, Sex and the Brain, he said he had that book too!  Well perhaps the book could be his that I read from as it was an old book from my library which may have some books inherited from the family!

I further shared with him that I had fun sharing my experience in public speeches about the book as many thought the book was about the Sex act when it was referring to the Sex gender! It was an enlightening book to learn that women actually have a slightly different brain structure from males and so we males cannot assume that they have the same thinking as us. So I shared with my brother how even old proverbs or idioms like, "Do unto others what you like others to do unto you" needs to be changed to "Do unto others what others like to be done unto them" instead! Hope any female readers of this can understand the logic for the change." 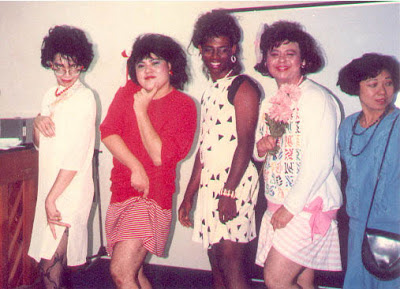 I should mention that I did also share with my brother that I felt I had done so well in my research about women that one day I felt I could become a woman too and I did it as the above pic depicts! Actually it was more than just dressing up as a woman that I meant but that I could really think and respond like one. Let me elaborate.

I had an encounter with two women one day who questioned me why I did a 'bad thing', looking at me eye to eye with a stern face! I felt the pressure for my brain to come out with the right answer quickly and it did. It was an answer that surprised myself as I simply responded, "becoz I felt like it!"  Now the two women heard it, turned to look at each other and just nodded their heads to seem satisfied with my response and had no further questions. How relieved I was and knew from that day onward I could really think and respond like a woman. Indeed my research and learnt ability to re-wire myself to respond as a woman does so that I would not antagonize them with a typical male response was proven successful!

End of my inspiration to write on this Mother's Day blog post!  If any male readers feel they want to understand women better to improve their relationships, I'm willing to share my discoveries over a drink.

Else just watch the video below :

(For those who came to this post following Mom's never ending story, please follow the instruction of the last line below to continue the story. Note that the story first started from the blog post here. The last post before this one for the story is found here.

Click here to continue to the next post of Mom's never ending story.)
Posted by Dad the KL city kid