Malaysia's mother of all elections TODAY, 5th May 2013 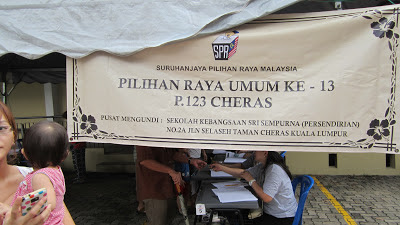 I faithfully went to my polling center of P123 Cheras which used to be the Taman Segar school but this year it was moved to the Taman Cheras school of Sri Sempurna, the former Taylor's college building. 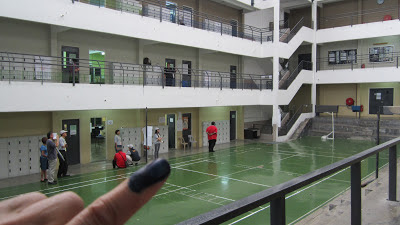 My left index finger was painted with indelible ink, being the 3rd of 8 demands issued by BERSIH 2.0. BERSIH started out as the Joint Action Committee for Electoral Reform which was formed in July 2005, and the coalition's objective was to push for a thorough reform of the electoral process in Malaysia.

The 8 Demands of BERSIH 2.0 are listed below with details of the demands given in the link above :
1. Clean the electoral roll
2. Reform postal ballot
3. Use of indelible ink
4. Minimum 21 days campaign period
5. Free and fair access to media
6. Strengthen public institutions
7. Stop corruption
8. Stop dirty polictics 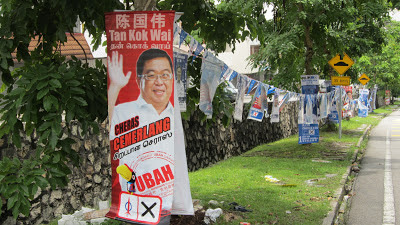 It was announced, at the writing of this post, that Tan Kok Wai of the DAP won the P123 Cheras parliamentary seat for the sixth term with majority of 37,769 votes. I smiled when I read this news as it's just about 6 times that I've been to the Cheras polling station since I first started my life in the fastlane in 1982 as recorded here. 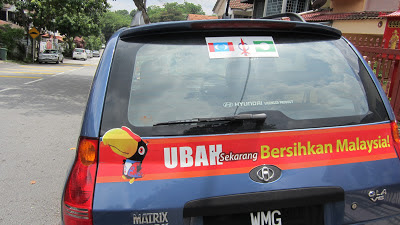 "Change now and Clean-up Malaysia" has been the voice of the opposition coalition party with extensive efforts to highlight case after case of unfair and corrupt practices in the country through the internet media and their political meetings. 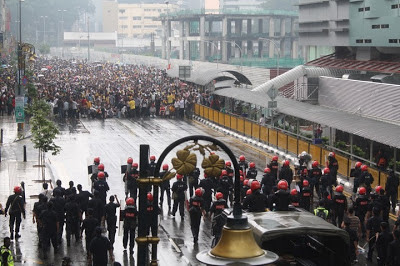 The people were moved by the information of what was happening in the country and when they tried to march to the Stadium in Kuala Lumpur on 9th July 2011 to have a peaceful Bersih 2 rally, they were stopped in the streets by the police. My personal account is found in a previous post found here.

The people tried again on 28th April 2012 to assemble at the Merdeka Square in the city for a peaceful sit-down protest... I zoomed my bike to the inner city where everyone was heading toward the 'Padang' or field where the old general post office was to assemble. 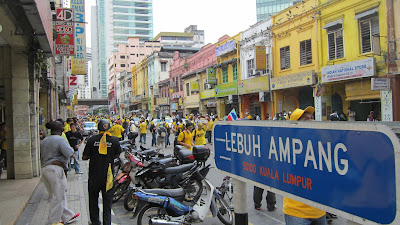 I parked my bike in the outer area near where the crowd of people were starting to assemble where the Masjid Jamek LRT station was. 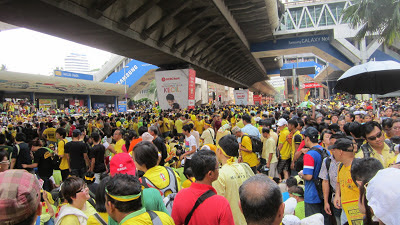 There was already a big crowd of people assembled there. 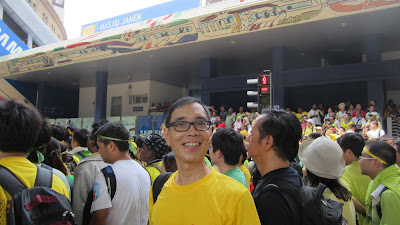 Here I am with the crowd. All seemed peaceful until... 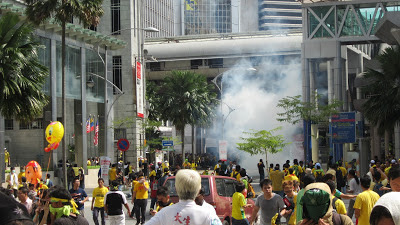 .... the crowd was dispersed by tear gas and chemical water shots by the police. 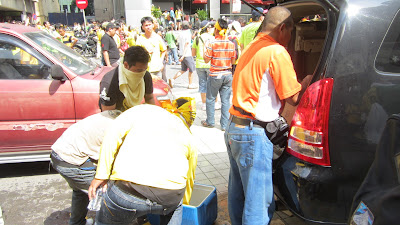 There were some people prepared with water and salt to share with others who were choked by the tear gas. 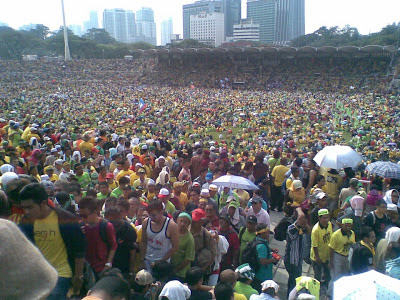 The growing numbers of the people refusing to stop to have a peaceful protest were finally allowed to assemble at the Stadium in Kuala Lumpur on 12 Jan 2013. It proved that the people could assemble peacefully without any ugly incidences occurring as they manifested their protest to the ruling party.  My thoughts about these milestone changes occurring in Malaysia and in the world is posted here.

The anger of the people should be turned to votes in a democratic country. That is why this 13th General Election (GE13) is said to be the mother of all elections in Malaysia as the ruling party appears to have the greatest challenge from the opposition party.

Whatever the results will be, I published my opinion in facebook with my personal photo as follows : 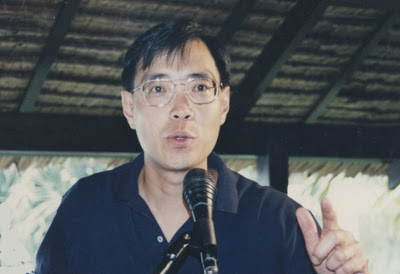 Remember, No matter who wins the elections, it's not the politicians who make this country. It's the ordinary people like you and I who go about our own business making a living each day, building up relationships, families and communities!

The polling stations all would close at 5pm of the same day. By close to 7pm, results started coming out through a few internet sites as well as live on television. By midnight, it didn't look as if the opposition would win the majority vote to form a new government. All facebook profile pics of those who were looking forward for the opposition to win simply turned black.

In the early hours of 6 May 2013, the final results was out. The incumbent Barisan Nasional coalition had garnered 133 of 222 parliamentary seats. The remaining 89 seats fell to the Pakatan Rakyat coalition. Details can be read here.

The height of this 'Mother of all Elections' in Malaysia seems to have an anti-climax perhaps as the hope and aspirations of a large growing number of it's citizens may not have been met.

On 7 May 2013, Anwar Ibrahim vowed to lead a "fierce movement" to reform the country’s electoral system and challenge the results of an election he lost. On 8 May 2013, about 120,000 people wearing black gathered at Petaling Jaya Stadium, Kelana Jaya, Selangor, to attend a rally organised by Anwar to protest against the election results and demand a free and fair election. I was there at the stadium to take the following photos : 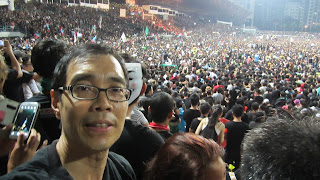 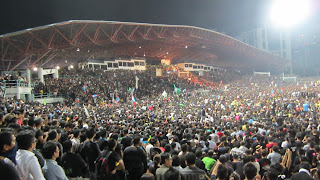 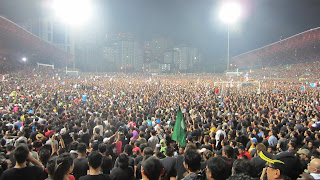 Having lived in this country for many decades and at the same time enjoying a global experience in multiple fields and disciplines, it is my desire in this post to give all the readers more hope in Life and even Humanity as well as considering ways to improve our political climate or system. 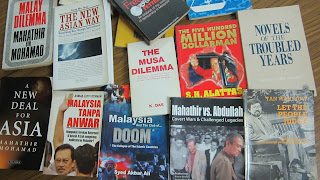 I had to keep myself updated by reading the books written by seasoned politicians.

Yes for the world is constantly changing and humanity has been in a constant search for improvement, even seeking for happiness! There are some advanced countries whose governments have almost perfected the job of governing and yet are desperate today to find out from the people why they are not happy thus causing the ruling party to be losing their political power through democratic elections over time.Well I'm not going to solve the world's problems in politics, a field that I really have no personal interest in but when there is a problem put before me, I love to be of help to solve it if I can. The way I have always helped individuals and organizations has always been to educate them to be more aware of the situation at hand so that they can apply optimal thinking to make decisions in their best interest.

To solve any problem, one really needs to be fully aware of what the problem really is seen from more than one angle. At the same time, one must be fully aware of all the possibilities that can help to soften the problem or even fully solve it if possible. After we have attained this double prong awareness, we must then intelligently decide on the optimal course of action to take. Once this decision is reached, meaning having everyone united in the decision making process of what best course of action or actions to take, there is simply just one thing left ie to DO IT! This may require a will to do it no matter how long it takes! If all these can be achieved, we are empowered to solve any problem in life.

So let us begin, since politics and freedom are at the top of our minds at this juncture, to understand the Politics of Democracy in Malaysia. This may require intense reading so it is advisable to print the contents found in the suggested link here. You will find a well researched article on Malaysia written by a very qualified advisor of governments, political parties and organizations who is based in Asia. It may be worthwhile to understand the definition of the word 'Politics' (from Greek politikos"of, for, or relating to citizens") as the art or science of influencing people on a civic, or individual level, when there are more than 2 people involved. Modern political discourse focuses on democracy and the relationship between people and politics. It is thought of as the way we "choose government officials and make decisions about public policy"

Malaysia was a British colony and we were educated in the parliamentary system of governance. Local leaders trained in law, such as Tunku Abdul Rahman, learnt the political system quickly and applied the knowledge to run the Federation of Malaya as its Chief Minister under the auspices of the country's colonial rulers. The knowledge was then applied to seek independence peacefully to become Malaysia's first Prime Minister.(1957-1970). Running a western democratic political system in a developing Asian country that is multiracial has not been easy for Tunku who faced challenges from opposition within his own Malay UMNO party as well as opposition from other democratic parties with the result of racial riots occurring after the third general elections(GE3) in 13th May 1969. The aspirations of the Malaysian government to foster harmony and unity among the different races in the country had to be consolidated in a more pronounced statement of national ideology known as the "Rukun Negara" that was declared on Independence or Merdeka day of the following year.

As the opinions of leaders of political parties may differ, we who live in a democratic country must make an educated choice of who we believe will be a better leader and party to cast our vote for. We need better information of each leader such as his mission and vision as well as their track record. The same applies to each party too to make our decision. With technology today, information is more accessible but too much information can unfortunately lead to indecision or making a poor choice for lack of understanding of all the flood of information. Hence I have spent time here on this post to make things clearer as clarity increases awareness that will allow better decisions to be made for the future. For this reason, surveys are some times conducted to get useful information even for the future political planning such as the one found here done in Malaysia and Indonesia with a large Muslim population.

Let's move to another post for more information on our political leaders in Malaysia and consider how to improve the political climate and system of the country by clicking here.