Has Dad turned Politician or become a Political Activist? 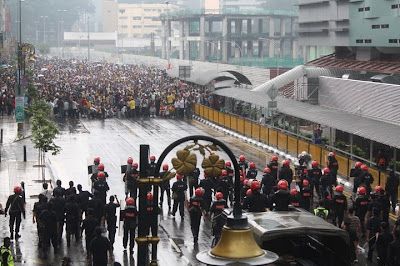 I was there in Jalan Pudu, near Pudu Raya cordoned off with the crowd on both sides by the Police!

I am strongly for community work , also a writer and a public speaker but does that make me a Politician or a Political Activist? Not at all as I have never felt or shown any political inclinations in my life whether in community organizations, businesses or even in the family network.  However in my lifetime, I have been nominated to lead such entities and have always been willing to let go of the position as soon as my term is up or if I find the majority is not in harmony with me staying in 'power' hahaha.  I believe strongly in the freedom of choice not just mine but others as well. For in heart I am more a peacemaker than a fighter as my interest in life is first to Connect in order to Synergize before we can really Futurize positively. (This was shared in my reflections on one Father's Day.)

I find no satisfaction in down sizing others for their faults and weaknesses. I tend to rather look inwardly as to how I can do better myself if found in the similar circumstances and may give my two cents worth of opinion if my creative mind can think of any better alternatives. Having said all that, I must add that I am inclined to seek for truth and purpose of life and will defend it with all my heart, might, mind and strength. This I do as I believe failure to exercise proven principles of life brings negative consequences not only to me personally but also to my family, friends and the rest of the community or country.

As a citizen of Malaysia where I have lived for over 50 years, I have always realized it is a promising young nation made up of a beautiful mixture of race, culture and religion. I had liken my own personal growth and development to that of our nation in a previous blog post . I believe in life, timing is everything and while certain weaknesses or imperfections in the country were tolerated in past years, it seemed to me that now is the time to express to the government the seriousness of such weaknesses if prolonged.

The Bersih 2.0 rally seems an optimal choice as it was not a political rally to support any political party or parties. It had clearly 8 demands to the Election Commission to put fundamentals in place for free and fair elections in a democratic country like Malaysia. ( Read or print this article by Rainer Heufers on The Politics of Democracy in Malaysia, to fully appreciate the intricate details.)
So there I was in the eye of the storm in the Bersih 2.0 Rally, the eye supposedly being the calmest part. It was ... until the end as recorded on my cellphone live video broadcast below :

As noted in my scratchy video clip at the last part, where I was has become a historic place for me. On the same street, our first two babies or daughters were born at the Chinese Maternity hospital, I was mobbed by 4 people in a bus in Puduraya, my father died at the Tung Shin hospital and today, I'm at this historic rally!

VIPs present in Jalan Pudu visible in the video include Members of Parliament R Sivarasa for Subang, Dato' Ng Khoo Ham for Bruas, Perak and Dato' Johari Abdul for Sungei Petani. Present but not visible on the video was Dr. Mohd Hatta Ramli, MP for Kuala Krai, Kelantan. 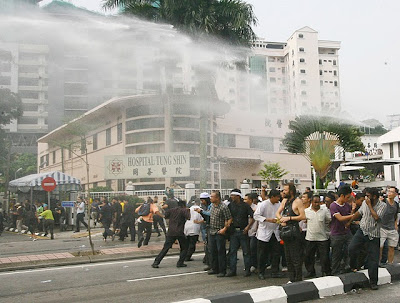 Can you find 'Waldo' in shorts on the right just as the first blast of jet water was shot at the crowd? I've since learned that it's not just ordinary water but has a chemical that makes your skin sting for a good 10 mins at least! It really hurts as recorded at the end part of my video above.

The next video below, in the middle part, shows exactly what happened at Puduraya along Jalan Pudu. The MP R Sivarasa, wearing a yellow shirt with glasses and a short 'goatee' beard, was negotiating with the police to allow the large group of people sandwiched by the police on Jalan Pudu to be allowed to walk out on half the road to Jalan Sultan.

Suddenly in the midst of negotiations, the police grabbed the MP away from the crowd and later started shooting chemical water and tear gas at the crowd again! I was right close to the front of the crowd who were peacefully waiting, seen on the far right of the photo above in shorts, as the water chemical spray began falling on us! 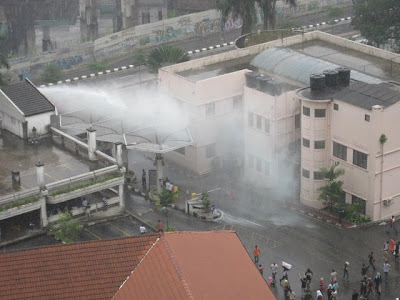 The crowd dispersed from the main street and some ran into the Tung Shin hospital compound thinking it was safe but apparently not! Read the names of 11 doctors who boldly refute the claims of the authorities and govt ministers that the police had not shot into the hospital compounds! 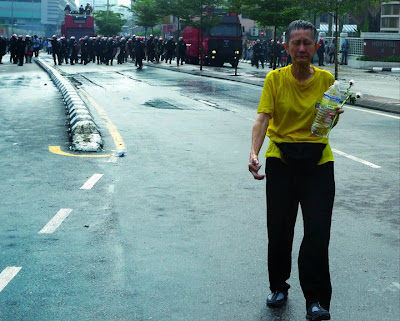 I may have thought I suffered quite a bit but then comes an iconic lady that makes you forget what you went through. She has become known as Aunty Bersih - The Lady of Liberty. See her album of photos.

No, I am not a politician or activist any more than Aunty Bersih is by walking the streets. We're just ordinary citizens feeling the need to support a movement to preserve the peace and beauty of this country by insisting on an electoral system that is fair and just for all. It doesn't matter which party wins.  We just do not want any tyrants or bullies to manipulate the system to keep power longer than what the people desire for that has a tendency to breed corruption for personal gains. I think the people of Malaysia are just awakening to the need for a truly fair and just system for all!

I end by with an Einstein quote, "Yes, we have to divide up our time like that, between our politics and our equations. But to me our equations are far more important, for politics are only a matter of present concern. A mathematical equation stands forever."
Current News as the event occurred
Malaysiakini live report of the Rally in various parts of the city

More photos, my 3rd party source of photos used in this post

Evidence of Police brutality on videos

Review and recommendations by the Bar Council President

News of Political affray in Malaysia by The Economist 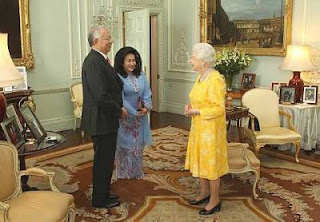 Queen Elizabeth II meets Najib and Rosmah during an audience at Buckingham Palace in London on Thursday. -AP (Reported by The Star online) - Wonder if the Queen knew what yellow meant!


Money Politics?
(To see the result of the by-election despite money offered click here. Click the profile link of Mr. Wong Ho Leng who won in order to view it.)


(Postdated development: A coincidence occurred in Kl to meet the opposition candidate, Mr. Wong Ho Leng, who won the by-election referred to above is recorded here. It is sad to know that he died on 21 June 2014 of cancer and so did another good politician, Mr. Edward Lee Poh Lin on 20 Dec 2011, whom I had known for years through community social work in PJ whose life is remembered here.)

Who wants to be a billionaire?

My fastlaneinfo video clip was used and received credits

Tumultous events in Malaysian Politics from 1987

The direction of the Third Force