The Real Mother of all Elections in Malaysia, the GE14 today on 9 May 2018

Why I had to add the word "Real" is many thought the GE13 last held on 5th May 2013 was the "Mother" meaning the huge and biggest election that would be decisive as to bring about Real Change or in Malay "Ubah" in the country's style of leadership or political rule in Malaysia.

Yet the GE14 can be said to be the "Real Mother of all Elections" in Malaysia. To understand why, one can read my journal of Politics in Malaysia to gain a narrative or understanding of the Malaysian political scene over time. My journal of the GE13 is referred so that a comparison can be made to understand what differences were there within 5 years of each other.

I personally did my duty in the morning according to our Constitution of our country to vote freely in my usual Taman Cheras district. With technology today, I used the SPRM Apps downloaded on my iPhone to know where to go: 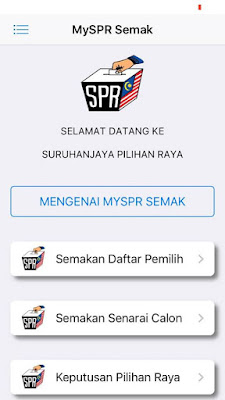 By just entering your Identification card number, I can see the location is the same place as in GE13, the Sekolah Menengah Sri Sepurna private school or the former Taylor's College campus. 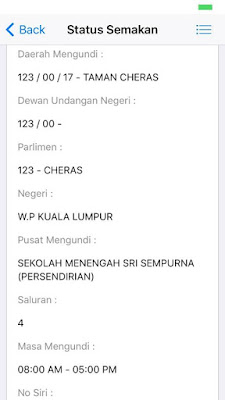 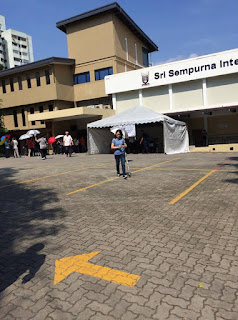 I went to the white canopy registration area to get my slip below after producing my Identity card.


Miracle signs come to my Consciousness to know that I will have something to write about in my Story of 7 miracle journal post! 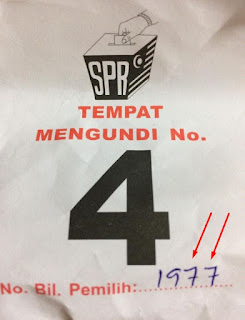 I couldn't help smiling seeing my lucky double 7 number to remind me to record this Big Day's experience in my Story of 7 journal post. Click here to jump to the date of 9 May 2018.

I got my double lucky number 7 for my slip of paper to go to room 4 to do my duty to my democratic country of Malaysia to cast my vote as I have always done according to the Constitution of my country. I am a proud to be a Malaysian to have raised 6 children here by my wife and I who are youngest of 7 children and relented to agree not to have our number 7 child as she asked for a break haha!

My contribution to the country of being a Malaysian is shared in an Independence or "Merdeka" journal post and my stand against corruption in the country is also recorded in many places since young found here and here. When I turned 58 years of age, born in the Chinese year of the Dog in 1958, I made this video at the height of my participation in an anti-corruption street protest by peaceful Malaysians in the year 2016 where I couldn't help but cry as I was filming the masses of people marching into our KLCC Twin Towers.

Since my first participation in my first street protest of Bersih 2.0 in 2011 to today's election results in 2018, 7 years had gone by to remove what we believe has been a major ruling political party turned corrupt in the government. The number of 7 years to reach the achievement of this day is another reason why the GE14 experience should be in my Story of 7 post mentioned above.


I joined the queue to cast my vote and wait to see the overall results by midnight!

There is a lot of anticipation for everyone casting their vote on this day! 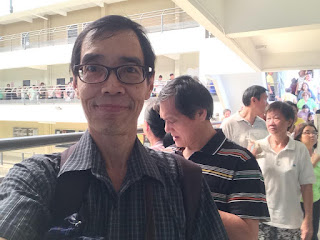 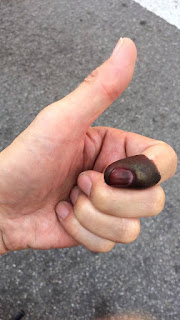 Indelible ink was used to prevent cheating of voting twice implemented after the Bersih 2 protest demands of 8 points noted in my journal post or in the Bersih 2.0 webpage.

Dr Mahathir makes his speech before midnight of Elections day:

Dr Mahathir made this live video on Social Media from Petaling Jaya Sheraton at 11pm on the same day of the elections:


It's confirmed that the new coalition of Pakatan Harapan won the election to form the new government. Details can be viewed online. 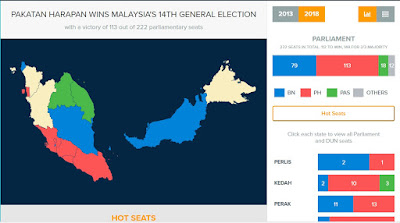 It is coincidental that I started to help in influencing the political scene of this country just as an ordinary citizen 7 years ago. Click here or the photo below to read my early beginnings of acting on My Consciousness of what I knew was happening in Malaysia that could ruin us for good! 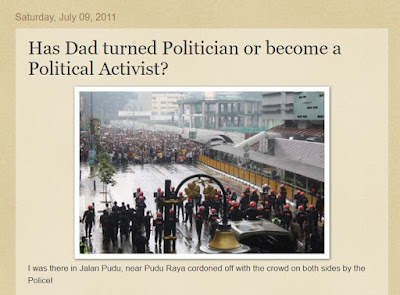 My Cup is Full! There is however much more work to do to continue to build this country of ours and it's colorful diverse people! I can now proceed to work on publishing my first Book entitled, "My Consciousness: Abacus to the Cloud. I've been called a Chronicler as I can easily write my journals of life experiences. This Book is not about my Life or my biography but about how anyone can understand the workings of their Consciousness, such as who is the "I Am" and use the awareness to live a happy productive life during their sojourn on earth, no matter what the challenges may be, as what I decided to do when I was a child. I learned it in all my life and still continuing to learn and share in the world of Social Media which represents the Cloud technology(From USA) from where my ancestors started with the Abacus(From China) and here we live in Beautiful Malaysia with the best of the West and the East to build our own future!  Malaysia Boleh!

Listen to the music I used to create the video below for a youth group learning Self Reliance!

The News goes out to the World
Click here or the photo below to read the first news out to the world in Social Media! 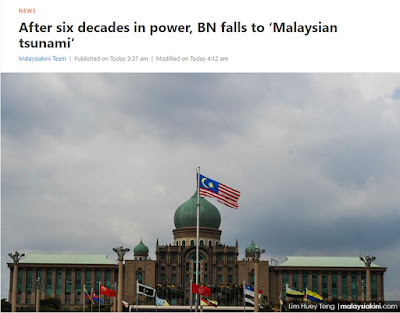 From Singapore
Click here or the photo below to read 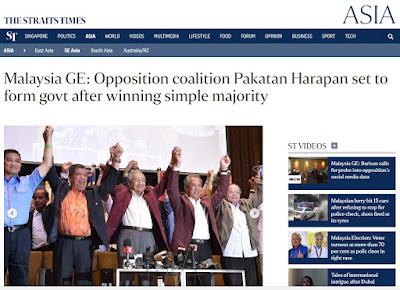 Special Thanks to the eligible voters who made the effort to travel near and far, especially those who came home from overseas to cast their precious vote to help Malaysia move forward! 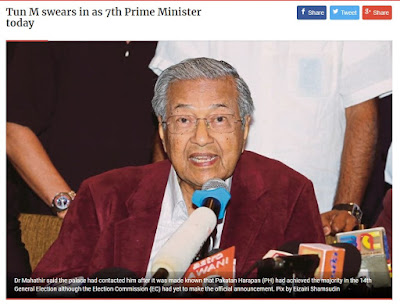 Taking the oath at the King's Palace


With the appointment of Dr Mahathir as the 7th Prime Minister of Malaysia confirmed and the organization of a new government with new leadership, every Malaysian in the country and around the world must surely feel the same way as I do personally, in simple language of Bahasa Malaysia, "Malaysia Boleh" or Malaysia Can with the spirit of positive emotions that as a developing nation, the country can "Succeed", "Win" and "Change" for the better. The music mentioned above with Malay lyrics can be heard by clicking the video shared above or by clicking here.

Everyone's excited and so am I but life will return to its normal humdrum pace I am sure, meaning we will all take things for granted and carry on living the routine life that we are all used to, looking after our personal daily needs. This may be so for many but there are the few who will continue with a vision of the role they want to play in their lives, to maybe fulfill the purpose they believe they are meant to achieve in the country they are born in. I call it the Optimal Consciousness of Man and Dr. Mahathir could be one such man who has shown his greatness in the past and could even return back to the same path again but with a different Consciousness. He came back with even more humility, confessing his mistakes of the past, feeling the need that something needs to CHANGE and he would act upon it even at his very mature age before he meets his Maker.


13 Nov 2018
Here is something interesting my Consciousness put together on this day: 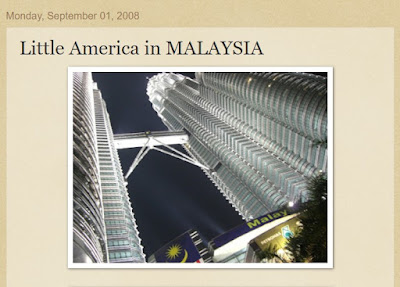 About 10 years ago before this blog post was started, I wrote a post entitled "Little America in Malaysia" which you can view by clicking the above photo or by clicking here. I noted then about the freedom we have in Malaysia to reason that it was not because of the law but "a mutual respect of each citizen for the rights of another regardless of what race or religion they may be from." The people therefore over 61 years today have lived generally very peacefully. They have been working towards the common good of everyone as a tradition of the people rather than because of any law being enforced. Following the system of Democracy, we voted for a major change in government

I had been following the news of the politics in America and if you click the video below of an interview with a whistleblower and dissident named Edward Snowden, he states that America is a country with citizens that would go against the law if the government had run out of control. The words used by Edward Snowden are,  "We were a country that was born from of an act of treason against a government that had run out of control. Now, this is not to say that breaking the rules is something that should happen all the time but we should always make a distinction that Right and Wrong is a very different standard than Legal and Illegal. The Law is no substitute for Morality.." You can hear this statement by clicking the video below which has been timed start at the same sentence printed above.


17.7.19
Visit into Parliament House in Kuala Lumpur for the first time by invitation:

31 Aug 2019
Great to see the new leaders of the government singing together on the theme of loyalty to the country and its people including the King:

Malaysian politics from the beginning to the modern day is maintained in this journal post.