Thank you for visiting and we like to wish you the choicest blessings this Christmas Season brings and for the coming new year of 2006 too!

Our December month experience and thoughts are recorded in the following 2 blog posts below so we hope you will enjoy browsing through it. We look forward to your comments which you can add by clicking the "COMMENTS" link found below. Remember this small instruction to choose an identity by clicking 'Other' before you publish your comments as most of you are not a 'blogger with a display name'.

If you didn't get one yet and would like our annual family VCD update of photos, music, video and words, ask for one through the same "COMMENTS" link below ok?

How a young boy ushers in the month of December 2005

It was the end of November and Ray our eight year old was left home alone with his Dad. While I was busy working on the computer he started asking where the Christmas decorations were kept. Being preoccupied, I told him to ask the maid and soon he was opening up the boxes in the living room. Although I was busy, I couldn't help noticing his patience and determination to assemble the Christmas tree all on his own! He put on his Santa cap and got to work, insisting that I put on a Christmas CD for him which I did. Soon his mother came home with his older brothers and helped to put up the rest of the ornaments. The time sequenced photos follows : 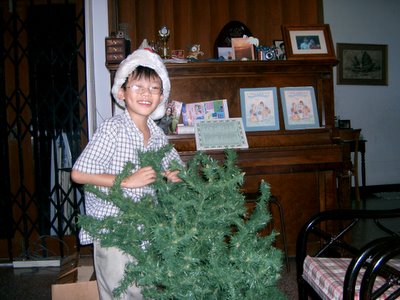 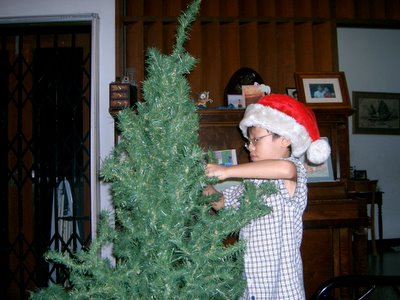 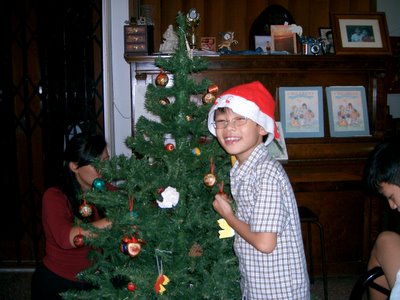 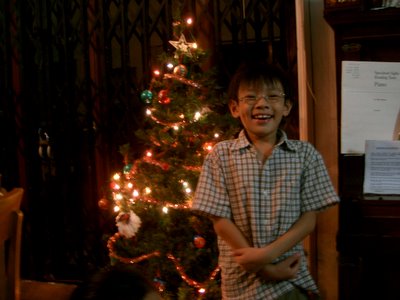 Can you see how proud and happy he was with his accomplishment?

As December month approached, days went by quicker with greater anticipation. The boys' two older sisters, one now in Utah USA and the other in Beijing China have been planning to return home for Christmas. What a joy it would be to have the whole family together again for Christmas as it's been awhile since that happened. Unfortunately, the two older boys Han and Shuan has a school band trip to perform in Taiwan over the Christmas period! Nevermind, we thought, as the boys will be back before New Year's Eve and then we will truly have the whole family together again after all!
Soon the girls started arriving from afar as the photos below depict. 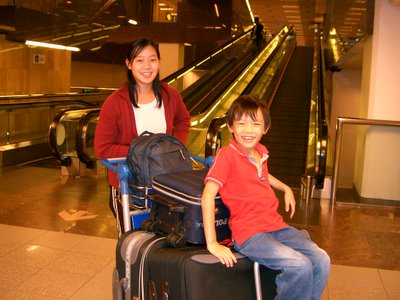 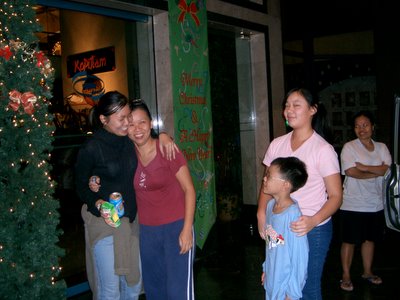 A few days later, Fei arrived from Beijing in a much shorter flight 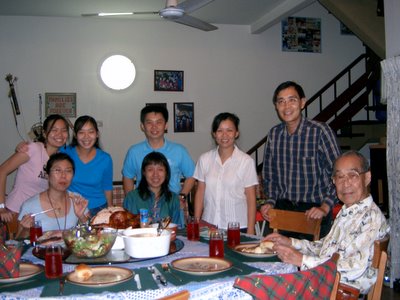 Our Christmas Eve turkey dinner with Fei & Su home together with grandpa and our regular guest, the gym coaches of our children, the Yongs. The children are hidden in the back table. 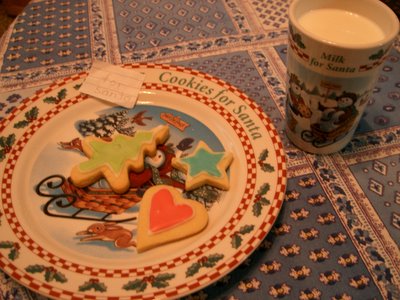 Just before bed time, Ray made sure Santa had milk and cookies for his anticipated visit! 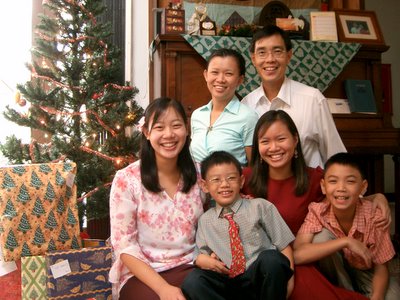 It's Christmas Day with presents left by Santa who finished the milk and cookies but where are the two older boys Han and Shuan? They are in Taiwan with the school band pictured below for some exchange performances there!!! We will have a full family reunion on New Year's eve. 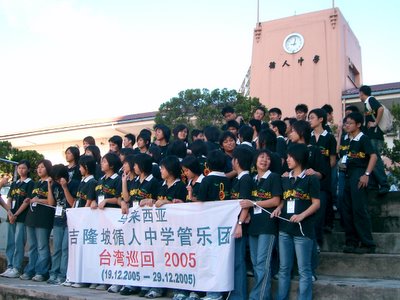 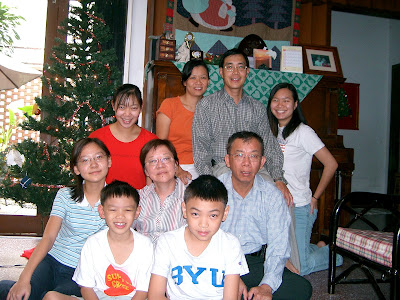 With the two oldest boys away, the gap was soon filled with family from Singapore joining us for the year-end celebrations.
Post dated event : Click here to roll forward 6 years later in Nov 2011 to see the recollection of this event on Ying Er's 19th birthday, the children's cousin on the far left of the middle row, celebrated on 11.11.11.
Posted by Dad the KL city kid No comments:

As the world over celebrates Christmas and the birth of Jesus Christ of Nazareth in the month of December, we as latter-day saints commemorate 200 years since the birth of the boy prophet Joseph Smith on 23rd Dec 1805. I was inspired earlier in the year (refer to my visit to Upstate New York.) to visit the place where it all happened. I am referring to "The First Vision" that was an answer to Joseph Smith's prayer in finding truth among the competing religions during his time in the early part of the 19th century. As a result of the visit, I was only further inspired to live more fully the principles taught by the Savior as restored by Joseph Smith, a name now as had been prophesied, is known throughout the world for good or bad. (See Newsweek Cover Story.) I am grateful to have gained my personal testimony or experience on the existence of God and the reality of his work among us today. Newsweek Cover is seen below - 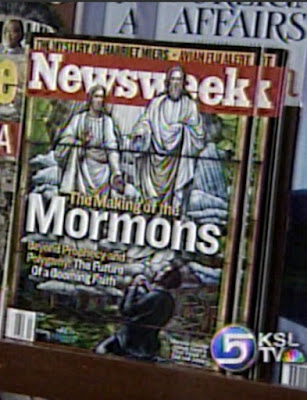 The highlight of the year for us came as an opportunity to participate in a choir performance invited by our church friends in Singapore. With a cast of actors from the Church members in Singapore, we managed 3 performances over two nights in a public auditorium to portray the life and contribution of Joseph Smith. Below are some photos of the events held at Lee Foundation Theatre on Nov 17 & 18 in the year 2005 : 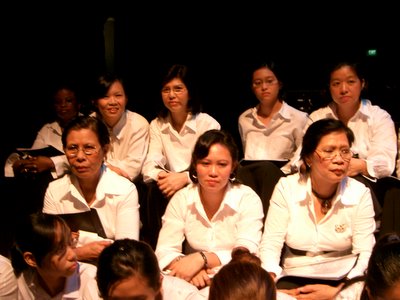 Above is Geok Lee during a rest time, sitting beside an old friend Evelyn. Being in this performance is reminscence of her younger days in Singapore with the choir. 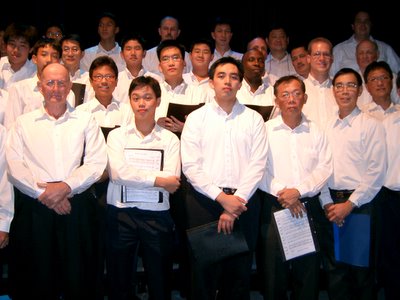 3 family members are in the front row, myself, Geok Lee's brother Yen Wei and our oldest boy Han. Shuan his brother could only help out to video film the event as at 13, his voice is breaking! 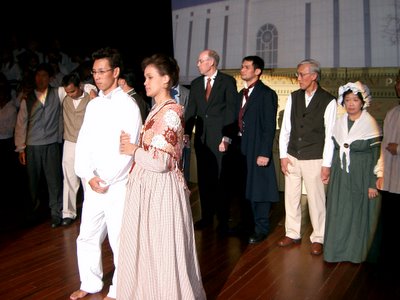 The cast of actors made up of local Church members during a full dress rehearsal. There were problems coordinating with the sound room but all turned out well for the following two nights! 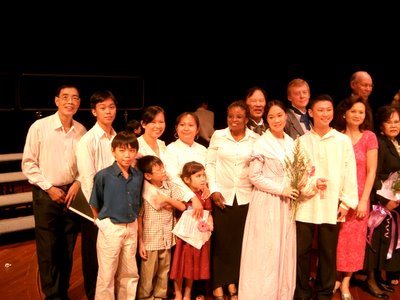 After the final curtain, it was picture time for everyone! 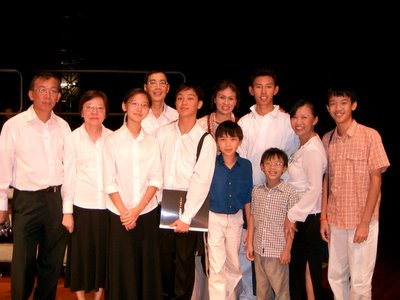 Video of musical parts of the play.

With great anticipation before viewing the General Conference Session on the theme of the Restoration of the Church of Jesus Christ, I came across this video of the making of the First Vision movies. I am amazed how we have matured in the information era where so much is shared with great transparency:

My first post in the Spiritlane journal for the year 2020 shares much about the excitement in my heart despite increased troubles evident locally and internationally. The Restoration of the Church has become so relevant not just for me but for all the world I believe. 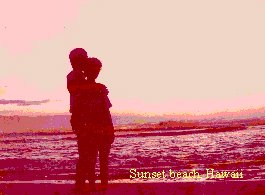 A picture can paint a thousand words.
Yet no words can express my feelings at this moment.
The Singapore Girl speaks
Posted by Singapore Girl 2 comments: