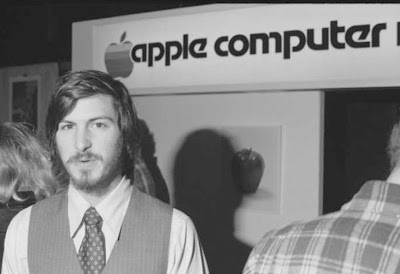 On the morning of 6th Oct in Malaysia or evening of 5th Oct 2011 in the USA, we received news that Steve Jobs, the co-founder of the world famous Apple computer company, had passed away peacefully. Now I have never met the man personally but due to my involvement in the computer business in the early days where the Apple computer was a revolutionary pioneer in the field, I feel inspired to create this post in memory of Steve Jobs. 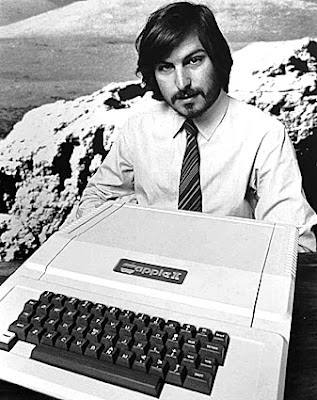 The Apple II computer was first launched by Steve Jobs in 1977, being the first computer with a keyboard and color screen. I had just started my University education in Australia and the only computer we had then was the PDP 11 by Digital Equipment Corporation (DEC). It was a 16-bit minicomputer that had a card reader to feed data to the computer! 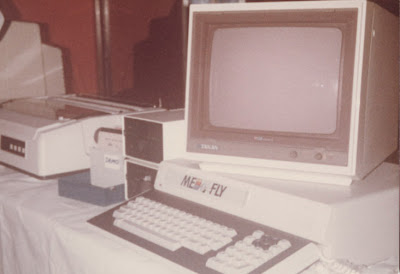 My interest in the microcomputer came after I had gone home to work after graduation. As a 3rd world country, the original Apple II was quite expensive. We got interested in the Apple compatibles and seen in the photo above is the Med Fly model that originated in Europe which has a symbolic name of the Mediterranean fly that killed the apple orchards of the farmers! 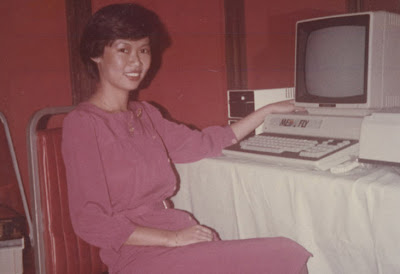 It was such a wonderful tool to learn the basics of microcomputers and guess who became the first system support personnel when we found customers to buy these new computers? The account was journalized in an early post at the beginning of this blog. 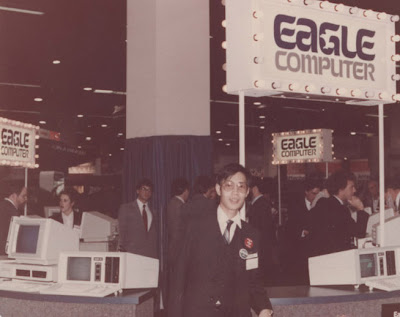 I soon found myself in a Comdex Computer show in Las Vegas USA where 16 bit IBM PC compatibles were making their debut such as the Eagle Computer from Los Gatos California. IBM had earlier launched their 16bit computers using PC DOS operating system from Microsoft. Eagle like Compaq and many other companies later began producing IBM compatibles that used the MS DOS operating system which meant they could run all software programs produced for the PC DOS operating system which IBM PCs used. This was how the IBM PC compatible industry was started with Bill Gates, the founder of Microsoft being the genius behind it. 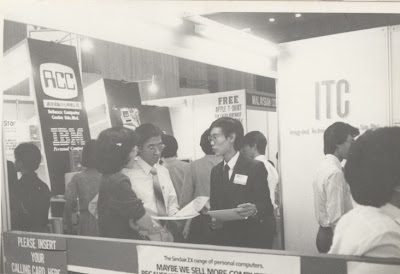 This was the beginning of ITC Group & Associates with my first company, which I had co-founded with a programmer named Alvin Tan, that began with the business of computer hardware and softwares that were IBM PC compatible. 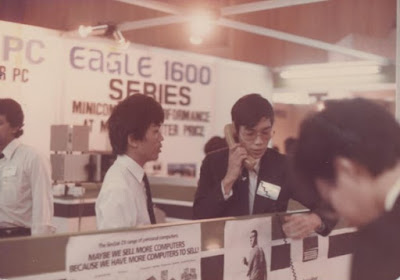 Seen above is Alvin giving me the technical support while I headed the management and marketing of our business. We rode the waves of the sunrise industry, taking us to the global community to acquire new products or sell our own technology that we had created, eg in the world renowned CEBIT Hannover Fair. Some of our achievements received press media coverage that are found here 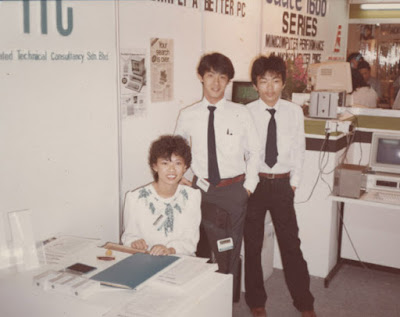 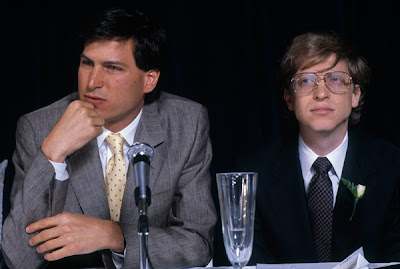 Steve Jobs of Apple and Bill Gates of Microsoft were the competing icons of the two microcomputer systems that were flooding the world ie the Apple computer with their Apple DOS and the IBM PC and compatibles using PC DOS and MS DOS.

Steve Jobs later shocked the world when he left Apple to start a new venture called NeXT on 12 Oct 1988:
Computer hardware technology was certainly advancing at great speed. However in my opinion, it was not until the internet or a global computer network providing a variety of information and communication facilities that really made computers powerful! In the yearend of 1997 when our last child was born, my oldest child and daughter was playing with "Tripod" and I explored it to produce my first online website here. 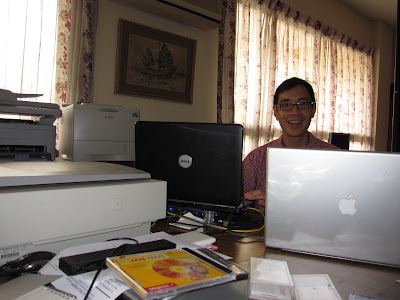 It was not until the year 2010 that I got an Apple Mac Pro computer as prices were beginning to become more competitive. I like the Apple computer for its superior graphic capabilities but somehow I cannot stop using the IBM PC compatible computers like Dell as the MS DOS operating system has too many software applications that I am dependent upon for my work and business. Maybe I'm the a annoying orange to Apple's products!

It is coincidental that on the date of 5th Oct which is my birthday, the same day that Steve Jobs passed away, I wrote a blog post for my daughter's birthday on 4th Oct US time, commenting that I had created a video clip for her using the Apple Mac computer!

His life and achievements can be read here.

A commencement address that he did at Stanford in 2005 which shares 3 stories of his life :

There have been claims in later years that these were the words of Steve Jobs as per the video below published in Youtube on Jan 29, 2016

The above video isn't working anymore that could be any reason in the free internet world. One could always find another like this one here that has over 800k viewers.
(Post-dated discovery: The new link also did not work over time.)


Text of what was claimed to be the last words spoken by Steve Job is copied and pasted below from the YouTube video found in the new link above.

"These were the last words of legendary Apple Visionary Steve Jobs, moments before he died...

I have come to the pinnacle of success in business.
In the eyes of others, my life has been the symbol of success.
However, apart from work, I have little joy. Finally, my wealth is simply a fact to which I am accustomed.
At this time, lying on the hospital bed and remembering all my life, I realize that all the accolades and riches of which I was once so proud, have become insignificant, with my imminent death.
In the dark, when I look at green lights, of the equipment for artificial respiration and feel the buzz of their mechanical sounds, I can feel the breath of my approaching death looming over me.
Only now do I understand that once you accumulate enough money for the rest of your life, you have to pursue objectives that are not related to wealth.
It should be something more important:
For example, stories of love, art, dreams of my childhood.
No, stop pursuing wealth, it can only make a person into a twisted being, just like me.
God has made us one way, we can feel the love in the heart of each of us, and not illusions built by fame or money, like I made in my life, I cannot take them with me.
I can only take with me the memories that were strengthened by love.
This is the true wealth that will follow you; will accompany you, he will give strength and light to go ahead.
Love can travel thousands of miles and so life has no limits. Move to where you want to go. Strive to reach the goals you want to achieve. Everything is in your heart and in your hands.
What is the world's most expensive bed? The hospital bed.
You, if you have money, you can hire someone to drive your car, but you cannot hire someone to take your illness that is killing you.
Material things lost can be found. But one thing you can never find once you have lost it, is life.
Whatever stage of life where we are right now, at the end we will have to face the day when the curtain falls.
Please treasure your family love, love for your spouse, love for your friends...
Treat everyone well and stay friendly with your neighbors.

Moments after speaking these words, that he had asked to be written down, Steve Jobs, aged 56, passed away."

The webpage to debunk the claim is found here https://goo.gl/iLEBU2  that was published on Feb 18, 2016 by Dr Adrian Wong, a Malaysian whose facebook account is here : https://goo.gl/xePGe1

'
From the webpage, the following is extracted :


Steve Jobs did not pursue wealth, only his vision for Apple

The fake quote alludes to a mindless pursuit of wealth. However, this cannot be further from the truth, because Steve Jobs has been earning a cool annual salary of $1 since he returned to a struggling Apple in 1997.
He’s not the only corporate executive to do this, of course, as they can be compensated through bonuses, stock options, etc. Steve Jobs is notable though for not taking any alternative form of compensation since 2003.
He took virtually nothing in compensation for his time and effort at Apple because he was not pursuing wealth, but his vision. His wealth, and his position at Apple, were the means to the end, not the goal itself.
I am not one close to the caliber of Steve Jobs but I have shared my life story of not pursuing wealth even at an early age shared here : https://goo.gl/8WSgIW  I have truly lived a happy life to this day following what I recall to be my passion and beliefs in life shared in my journals. I have already lived passed the age of Steve Jobs and look forward to living and doing more happy things that my passion and beliefs drive me to do.

Here is another excerpt from my writings found here : https://goo.gl/4Xw7Zq

Shared on 20 Sep 2016
Post-dated comments
5 Mar 2021
Fake quotation or news during this time of life is more visible evident in my research of US politics where two news stations, the CNN and FOX news could publicly report opposing facts noted by me in this journal.