As a Sec 4 Science Stream student in ACS up to the O Level examinations in 2008, Woon Han's climax was to top his school as the Valedictorian. He decided to have a go at the Arts Stream in the two years of his Form 6 classes at ACJC, preparing for his A Level examinations. Just before his actual A Level examinations, the college gave him 3 awards in their awards presentation night. The first was for his participation in the Choir as the President. 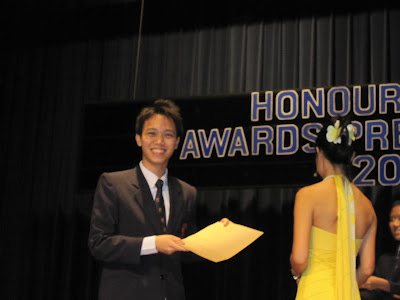 He receives his certificate from the Guest of Honour, Dr Anne Tan Kendrick 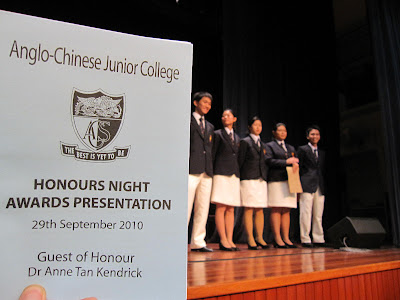 The next award was for Performance Arts Award videoed below :


The third award was special as it was kept to the last, being the Principal's Honour Roll videoed below : 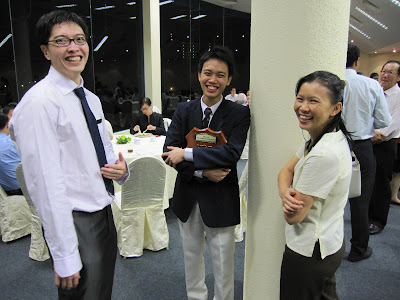 Here is the proud mother having a conversation with Han's economics teacher. 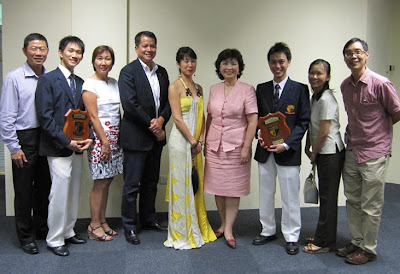 A proud moment for the parents who were invited for a photo session with the ACS Board of Governors Chairman Mr Richard Seow in the centre, the Principal Mrs Kelvyna Chan in pink and the Guest of Honour Dr Anne Tan Kendrick in yellow. We enjoyed the light conversations with them as we sat on the same table for dinner after the award presentations. 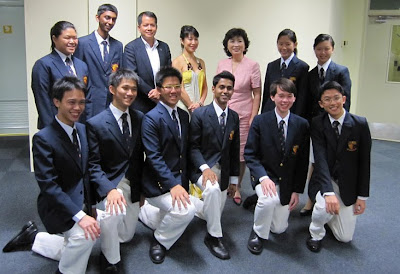 Above are all the students who qualified to be in the Principal's Honour Roll
Posted by Dad the KL city kid at 7:35 AM

wow, that's quite impressive Han! Great job! I'm proud to say I'm related to this guy. Not that I wasn't proud before. ;) hahaha That's great news! Keep up the good work!