The significance of the time I woke up early on Sunday morning on Father's Day in Malaysia?


The significance isn't so much that the numbers all add up to 7 but the spirituality behind the stories I share on this day. The stories are not mine but from my oldest child in the family and daughter Fei, whom I first emulated to begin blogging, following her latest teen interest. Why have her stories on this Father's day post one might ask? The answer may soon be made apparent when I begin to share more of my thoughts in this same blog post based on the links of my Body Mind Spirit experience explained here. Today I have further related the Body Mind Spirit domains to the 3 important domains of Interpersonal, Cognitive and Intrapersonal for the 21st century that have been named by the US Academy of Sciences Engineering Medicine.

Well besides the time and date of the start of this blog post that was coincidentally significant, shared above,  Father's Day this year turned out to have other coincidental events squeezed in one day. I'm spiritually uplifted by this coincidence of events, unaware of it when this baptism date was fixed by the missionaries who chose it based on when the people they were teaching would be ready to be baptized. At Sacrament Meeting, we witnessed a father giving a baby's blessing to his first child. In the afternoon we witnessed another father who baptized his youngest child. We also witnessed another convert baptism in KL branch all captured in the facebook post below:


In the night of this Father's day June 18, (night in Asia, morning in USA) we had a family google hangout together, missing only Shuan who is serving as a missionary in London.  This hangout ended up to be a wishing of Happy Birthday to Fei and Ern that could not happen on the day of their birthdays on June 14 and 16 respectively as the timing just couldn't work out for everyone. Interesting that when it all works out, the play of numbers of the time and date above for me in KL adds up to number 7 as computed up above at the start of the post! How wonderfully coincidental and smooth flowing everything turned out,

The star of the online gathering, of course, was Baby Leah who entertained us actively with her presence. Watch the excerpts of the video below:

Next morning I woke up on a Monday while it is still Sunday or Father's day in the US to read Jay's facebook wishes to his father for Father's day and to Su, for their Wedding Aniversary screen captured below : 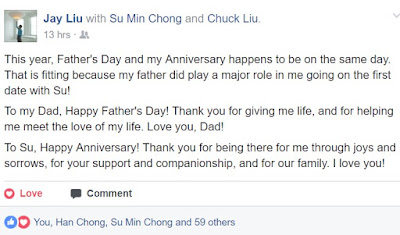 It was then that I realized that I had left out noting this Wedding Anniversary as also one of the coincidental events occurring on this year's Father's Day of June 18. The wedding activities of Su & Jay in June 18, 2011 where all our family members made it there is still vivid in my mind and treasured in this journal post.

On this same Monday, I also wrote our family email to Shuan on his mission in London with the following excerpts :

I received another email from your Mission President assuring everyone that you and all missionaries in London are safe due to a bombing of a mosque there. On checking the news, it occurred near a mosque at Finsbury Park, I am glad you are safe and other missionaries too but sad for those who died. It is indeed a tumultuous world we are living in and reminds me of Elder Russell M. Nelson 's talk entitled "Men's Hearts Shall Fail Them" during troubled times prophesied in the world towards the End.

Well a lot happens to me each week and more so this week with a culmination on Father's Day on Sunday June 18, 2017

Much earlier a couple of weeks ago, I had changed my facebook profile pic to a ridiculous one below: 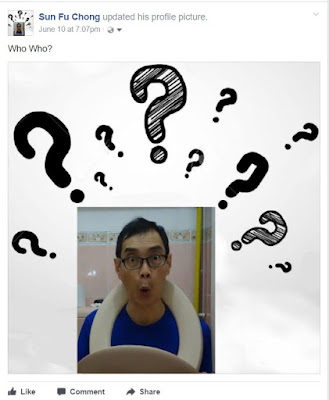 It kind of ties in with the photo I first posted of Leah in facebook last summer below with the 'Who' question as well seen below : 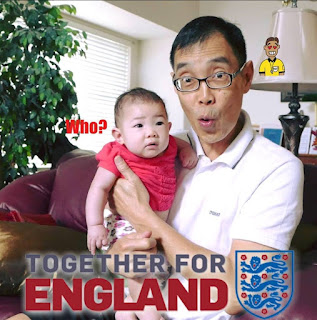 Little did I know what I did then quickly while at the Liu's home to create the photo above would be relevant today with the terrorist activities England is having!

But the reason for the toilet seat around my neck photo was captured for a different reason. It was a new toilet bowl cover btw that I had bought to replace the one that was broken in our Spore home. It is symbolic for me, maybe not to others haha, of my life's achievements. I have learned in life to fix almost anything due to my Head's ability to have ideas, have the Heart to connect people to work with me plus the Hand to really do it. (Action)

You see, the new fb photo profile of mine was symbolic that I have reached a level in life where I have little fear or embarrassment for my weaknesses or whatever negative things about me that people may want to gossip about. As the down-to-earth person from young, my CSF initials in my journal writings explained that I began to understand myself to be one who seeks to Connect, Synergize and Futurize with others."   End of the excerpt from the week's letter to Elder Chong, cc. to family.

(This Head, Heart & Hand metaphor was learned recently from my TalkLane video interview with an old friend seen here.) Of course, I would give due credit to my God the Savior for his Spirit that filled my Heart and Mind to help me do the noteworthy things in my lifetime.

Here is his reply,

Thanks for all that you do! The house would be falling apart if you're
not there haha! Thank you for always trying your best to be there for
us whenever we needed you. Perhaps we don't say it much and on the
contrary grumble a lot. But whenever I think back, I'm grateful you're
always there. I'm glad to hear how many things are working out for
you. Love hearing about it every week! Take care!

Being active in the beginning to blog in familylane, fastlane  and spiritlane, later qualifying to be in Social Media by joining facebook, I am surprised some senior extended family members who are out of touch with what social media really is about, but could access some of my publications, questioned me if I was boasting of how successful or rich I was!!!  I guess my toilet seat profile picture should paint a thousand words to help them realize the 'systematic errors' in their thinking.

The above excerpts of my writings to our Elder without mention of the "30 days of Vulnerability" initiated by Fei explains why I chose to include her facebook posts on this blog post. She was the one who showed me how honest and open she was to share things to the public and so I followed her style. Fei was actually in my Creative Support Centre office in Kuala Lumpur in 2004 involved in a team to help me start off an on-going research focused on Optimal Performance and Thinking with the objective of helping Organizations to become more effective. (See this journal post.)

My following comments shared with her in some of her vulnerability posts further reflects the connection we have to each other:

The ancient domains of Body Mind Spirit or the Interpersonal Cognitive Intrapersonal domains named by science today come to play in my perception of her communication below :

Sharing her Vulnerability for 30 days

My comments shared below :