My sister-in-law was going back to Australia on Sunday and I thought it would be nice to catch her before she went back home. After losing your parents and then your wife, one tends to gravitate to find someone older whom you can relate to especially family members who have greatly influenced your childhood to find comfort and familiarity to connect with them again. After all, I've coined the first letter 'C' in my name as my interest, to Connect as posted in the bottom of my website pages found here, displayed in full color below:

In the process of connectivity, I shared my interest in writing a book with my sister-in-law and my brother who suddenly asked me, while driving in the car, what is the title of the book? Talking about the desperation that brings sudden inspiration, I blurted out the title, "What if...?" My first impression was that it sounded kind of silly, to be honest, but when I saw the reaction of my brother and his wife who seemed to reflect a smile of acceptance on their faces, I felt quite pleased with the title. Now, why did such a title come into my mind to announce it so quickly? It could perhaps be due to the very first thought that prompted the whole thinking process of me becoming a writer which was, what if... I was to write a book?

On the following day that she would take off on her flight, it was Sunday and also Mother's day. It was the very day that my brother and I had an interesting conversation together shared in a Mother's day post here.  It was also the day I was prompted to share with him more technological information that he had shown a keen interest in. Another spark of inspiration came in that I could get him an iPad for him to try out and learn to 'play' the apps as part of the learning process. I could bring back the iPad for him on my next trip to Kuantan and he agreed.

After going back to KL and finding a suitable iPad for my brother and having made my way to Singapore for Shuan's graduation day, I finally made my way back to Kuantan again. To my surprise when I arrived late evening from a drive from the south to cut across the peninsula northeasterly through Segamat town through the narrow but straight forest road to Kuantan, I found my nephew and wife with their first baby girl at my brother's home. I was informed earlier that they would be making a stopover from their US holiday trip back to Australia but didn't realize it was this same weekend. It was a nice reunion for me with the young couple that we had last met on their wedding day itself several years ago in the August month of 2006. 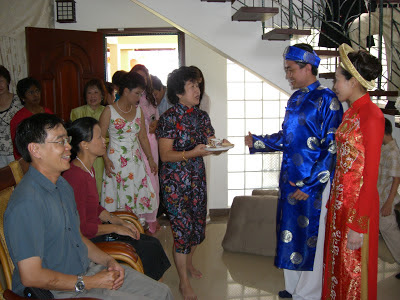 At their wedding tea ceremony about 7 years ago with more pics found in the post here. 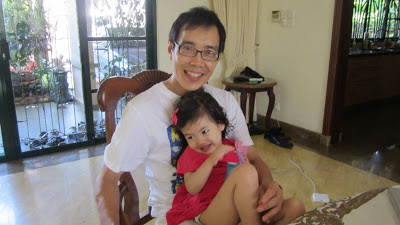 With their first daughter Milan who is a cute happy girl indeed! 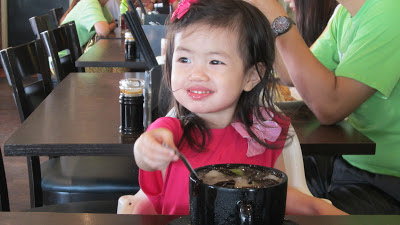 Another irresistible photo was taken of her.

As I was chatting with my nephew, I was surprised that he had become aware of me wanting to write a book and asked me if I have started? Well, I responded that I haven't and the fact that he had asked me if I had prompted me to start on that weekend itself. Thus my brother and his family got to hear the opening lines of my book that is shared here :

"Adam found himself in the lone and dreary world after he partook of the fruit of knowledge of good and evil. What happened to him? He knew that God had given him a wonderful place to live with Eve in the garden of Eden where there was no pain nor hunger for everything grown was for him to partake of but of the fruit of knowledge of good and evil he was not to eat as on the day he would eat it, he would surely die! Maybe at some point in time, Adam must have had the thoughts come to him, what if...?

Gautama was the son of a powerful King who ruled vast kingdoms and had a palace that had everything that the young Prince might need. There was fine linen from China, exotic fruits from Asia, dancers and musicians from far away to provide entertainment. He was also safe from danger and no person or animal can harm him as long as he stayed within the palace walls. When he was near the gates of the palace, he could hear unfamiliar sounds and experience different smells from the outside world which made him have thoughts that began with what if...?"

Post-development: As the research and writing for my book progressed, a third "What if...?" popular story from ancient times was added to cover the majority of the world's population of well-known stories that influence their culture. This, of course, will be only shared in my published book so as not to steal the thunder of its effect too soon!

Wow, how easily ideas flowed and I could write an intro that would lead to many stories of the world that began from simple thoughts of what if...? Readers could be motivated to fantasize outside their box, historians can be motivated to suggest ways to create a better history of the world by benefiting from past knowledge and ask what if...?

Kuantan is where all the things were happening to me, seemingly with strong inspiration from my late wife, that made me consider what if I spent more time there free from the distractions of the world to speed up my writing. 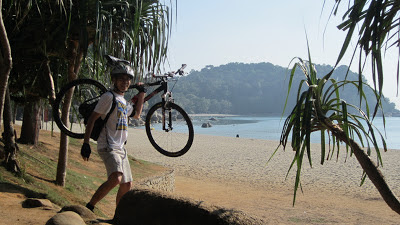 The natural environment is highly motivational to me

I even found the latest music from the 2013 Eurovision Song Contest sung by Dina Garipova from Russia entitled "What If" while I was in Kuantan through my iPad browser! How coincidental these series of events that occurred in the last 30 days that touches my Heart and Mind.

Listen to the song "What If" with the lyrics below

Only dumb egoistic people are tied down by their ego about race supremacy! IF I'm in charge, I would have bite the...
Posted by Leong Meng Yew on Sunday, September 20, 2015

Time passes quickly and just before the Pandemic of 2020, a centre is established in Bukit Bintang to participate in the positive change or transformation of our society at www.BlueBoyMansion.com, working closely with Bukit Bintang Foundation, KL Society and SustNET.