Dinner with the Richards

It's been eight years since the Richards left Malaysia back in 2003.

After moving to several more countries and locations, brother Richards finally retired in July, and brother and sister Richards have decided to settle down in West Jordan, Utah.

On August 2, Karen got sealed to Roger and I got to attend their luncheon up in Clearfield, UT.

Here's a picture of Karen and me at Karen's wedding luncheon: 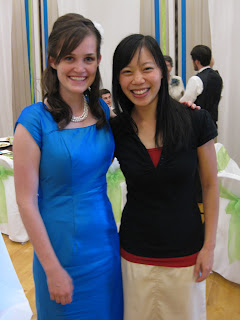 Then we took one with the groom in it, of course, and also with brother and sister Richards: 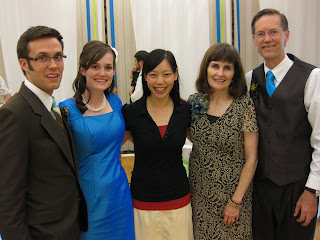 After things started to settle back down again for the Richards, they invited Jay and me to have a Sunday dinner with them.

Here's the evidence of our delightful evening with the Richards today. Tim is the last of the six children to leave the home. He starts his Freshman year at Utah State University next week. So starting next week, brother and sister Richards are officially empty-nesters. 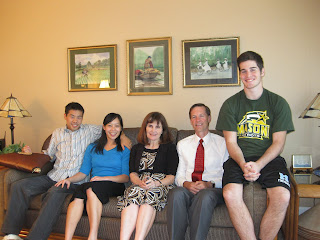 What a great family!!

Thanks for sharing Sun Fu! Very nice.
Karen and Roger have a miracle! They are expecting after five years of marriage! We are so, so, so, so very grateful for this blessing!
Dirk and I are serving our second mission together. We are serving a temple mission this time in Merida, Mexico. Dirk is the second counselor in the temple presidency.
We love and miss your family! We are grateful for face book and seeing the good things that are happening for all of you. I miss Geok Lee too. She has a special place in my heart! A great lady!!!
Thank you again for sharing!
With love, Claudia & Dirk

What wonderful news of the new baby! Thanks for penning a few words in my old blogger journal here! I must be old fashioned to maintain my blogging but I enjoy facebook just as much in sharing moments of happiness, excitement or something silly that comes spontaneously.

So happy that both of you are carrying on the work of the heart together as a couple, what a great blessing! I'm getting teary eyed just reminiscing the close times we had together with your family and ours! We miss the Mom of our family too and I am grateful for each time I get to be at the temple and feel her presence! So wonderful that you can be serving a temple mission to enjoy the blessings of the Spirit! I still write to Geok Lee on facebook believing that she must be having access to it in her heavenly home!!! I'd better stop writing more here or... Just know I am so touched that you could communicate with me here.... am truly touched! Thank you Angels on earth! So miss the days of old and our time together. As an accountant who moved on to the technology world in business, I tend to remember Dirk saying while in KL that, "I work each day at the office from... but after work, the time is all mine!" Enjoy the great time of your life that you truly deserve Dirk! Love from all of us now spread out in LA, Boston, Singapore, KL and Shuan in London on his mission! We had a great family time together before he left as shared on this blog post here : https://goo.gl/Yhzlti