On Wednesday during the week, Shuan attended a seminar at Ngee Ann Polytechnic for their "Science For Our Future" festival that featured a panel which included Nobel Laureate Barry Marshall. Prior to the seminar the participants were to submit questions online for the panel to answer. Shuan's question was found to be the best that was chosen to be answered by the panel. His reward was a brand new iPod touch!

Today Friday is his Award Presentation day for another year's scholarship at his college. His perfect GPA score of 4.0 for the first semester last year and consistent hard work after contributed to his success in winning the scholarship at his college again for another year! This accomplishment is added to our family blogpost that keeps track of the academic success of the boys in Singapore to date.
The following video and photos were taken during this special event to make up what I call a win win win or triple win week for the family:

Click the above screen to see the video clip or on this link if you don't see the screen. 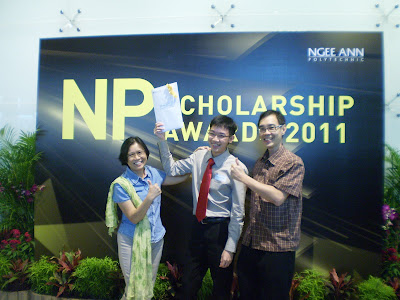 Triple win because Shuan won his iPod touch and received his scholarship award... 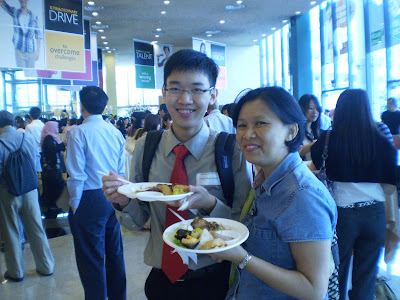 ... and the fact that we got to enjoy a nice banquet after is the third win ??? 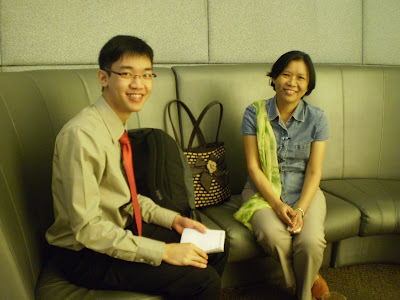 Nooooo......the real third win is when Mom in the morning, after a blood test at the hospital the previous day, got to meet with her doctor who looked at her test results to give a her thumbs up opinion!!!  Her cancer markers are down and her blood platelets are up where she had in the previous month seriously needed a blood transfusion! She had to turn down or cancel several story telling assignments due too her weak condition since then but now the doctor told her Go Go Go!!! This event and other post dated events of Mom's health journey will be added to her 'Unstoppable Mom' post here. 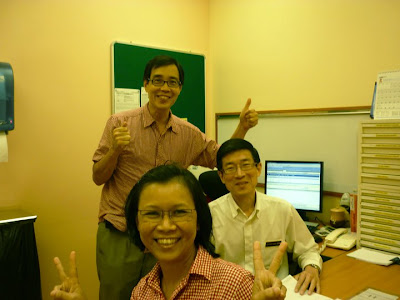 Hurray to our truly unstoppable Mom!

For those curious as to what was the question that Shuan asked to win the iPod touch, here is an extract from facebook of the conversations that were going back and forth among family members and friends :

Han Chong
is IMMENSELY proud of his brother Shuan Chong who, invited as a scholar to the Ngee Ann Polytechnic Science for Our Future seminar that featured a panel which included Nobel Laureate Barry Marshall, won himself an iPod Touch by asking the best question!!!! =)