It all started with a Bicycle 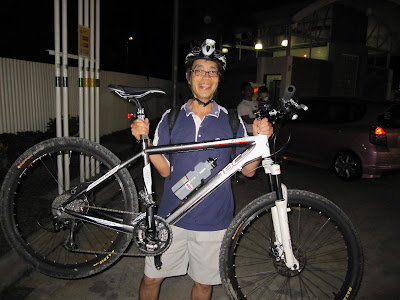 I had announced on July 16th (date chosen by staff as 1+6 = 7) in the eXfuze Anniversary 1 Celebration that we would be launching a community outreach program which would include promoting cycling for better health in the PJ community where our warehouse office is located on Jalan 223. (2+2+3 = 7)

Not long later, I enrolled myself to my first Charity Ride event organized by a Rotary Club with the theme of "Pedal Away Polio" to observe what was the biking community like in PJ. Below is the pic I took after the ride with my rider's number alloted to me pinned on my back pack, number 170! Well getting hotel room numbers and floors with the number 7 on it has become quite a regular occurence since I took on the eXfuze business and I wasn't moved much when I got my number. Then after crossing the finishing line, I laid my bike on the floor as it has no bicycle stand to reduce weight. Then things started to happen : 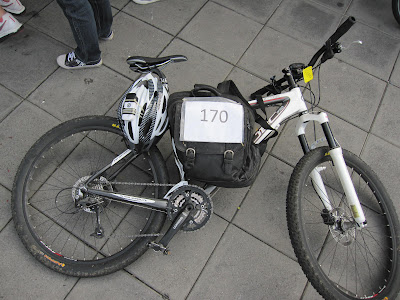 It is common to leave a bike on the floor like this. 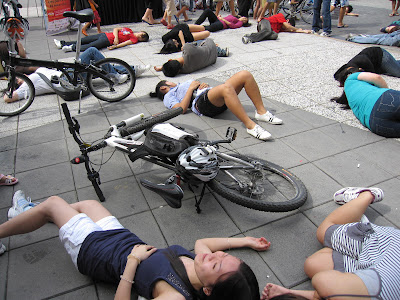 But do you find it common for people to lie down like this on the floor too beside my bike???


What actually happened was we were all waiting for the Lucky Draw to start and meanwhile the organizers had some students to dance with the music. To my surprise at the end of the music, they all laid down and thats how I got the above photo!
Then I got prompted to use my phone to do a live video broadcast of this event closing which would lead to the Lucky Draw. Check out the suspense of the numbers being drawn as per my live video broadcast by clicking here. You will also get to hear my live interview with a rider who rides to work and back everyday covering about 80km a day ! Also you can see a 72 year old bike rider receiving a prize. 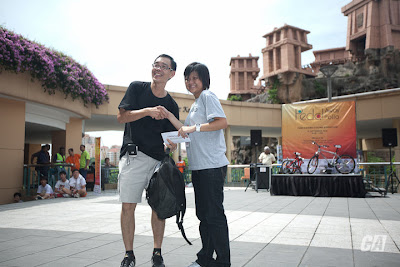 Yes! Number 170 was pulled up and I did win a prize! Watch the live video broadcast by clicking the link above to see how lucky I was to have my number drawn!

I went home quite happy with the morning's event and was tickled by my live video broadcast that I did so that my wife and kids in Singapore could view what was happening. I'm sure they were tickled too as they know my familiar Story of 7! If that wasn't coincidental enough for you that Rider number 170 won a prize, read on further : 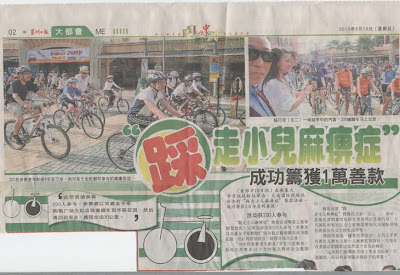 The following week I was surprised that my colleague told me he saw me in the Chinese Newspaper above! That's a double surprise for Rider 170! None of the above surprises were planned at all!

Another interesting occurence since our July 16th event is that 3 months later, on October 16th, the local press was filled with news of the new 2011 Budget which included news that the government will allocate RM350 million to implement programmes to combat crime. For the first time, the police apparently have formed teams to patrol crime-ridden areas on bicycles as they can cover areas inaccessible by patrol cars! See the press cuttings below : 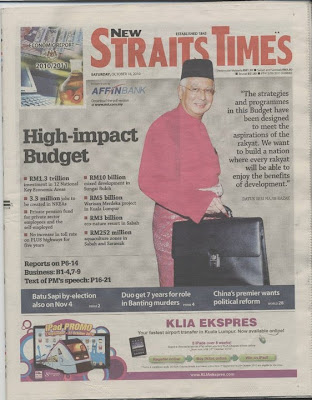 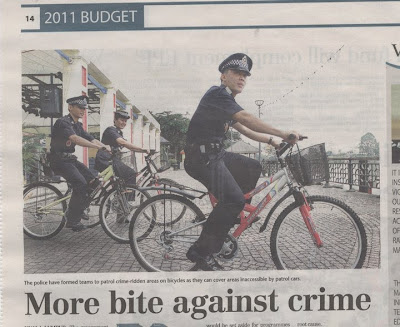 Click here for more photos on my on road, off road, day or night riding experiences!

Here are some videos to watch (Click on any of the images below to start the video ):

An off road night riding event outside Kuala Lumpur

Exercising our dog Ace on a bike in the night

Off road night riding in Singapore!
Posted by Dad the KL city kid