Someone text messaged me the early news that Obama won the US Presidential elections on US Nov 4 and I turned on the cable TV to catch his winning speech below :

My ears pricked to listen closely to Obama's touching speech and my eyes became teary. I was touched about what he said and my long held beliefs of America's spirit flooded my heart and mind again. Obama's victory seemed to give me more hope of my success in my latest business project with an American MLM company new into the Asia market. (Read about it here)

I have been hitting hard with the message to the American management that they must change their thinking and management style to win the market leadership in Asia. I always had hope that Americans can do it, though doubts arose during trying periods of this possibility. With Obama's victory, I now know with greater confidence that the American management CAN change. I noted the key words Obama used in his speech and emailed it immediately to the CEO and senior executives of the company, quoting from his speech, 'That's the true genius of America, that America can change. The union can be perfected' 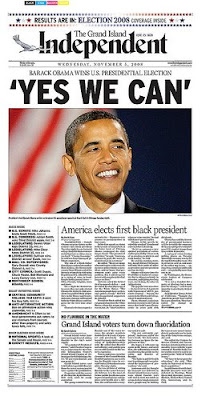 As the American political scene came to a climax in the news, I turned to the local political scene by reading the blog of our former prime minister, Tun Dr. Mahathir Mohamad :

To my surprise, the former prime minister's latest post in his blog had a 'Congratulations Obama' title. I have read Dr Mahathir's blog several times before but this time round, I was inspired to leave my comments in his blog. Try to look for comments from 'Dad the KL City Kid' amidst hundreds of others with the timestamp as Nov 6, 2008 7:25 pm. (The post of Dr. Mahathir is found here where I had left my comments which had reference to my previous posting about Little America in Malaysia )