The experience of Mom going to hospital

Life is definitely a journey through good times and bad times. Going to the hospital in my experience has been one example of a journey of fluctuating emotions. A happy time going to the hospital was realized in my first part-time job as a student in Australia where I wheeled patients to the physiotherapy department for their exercises. More happy times followed much later when I would be at the hospital at the maternity center to become a father on six occasions with Mom. The 'push and cry' part was a little scary but it all turned out happy in the end when all six children with their mother came out healthy.

It was certainly a bad time for me to wake up one day in March 1985 at the hospital in Johore Bahru, the city just next to Singapore, after a head on collision with an oil tanker truck that left me unconcious for 36 hours! I was lucky or should I say blessed to be alive with little permanent injury sustained.

For mom, it was another time at the hospital but not for happy reasons. She was suspected with breast cancer just before our trip to the US(See post.) but the doctor gave the go ahead anyway for our trip. After 3 hospitals and several consultations with doctors, counsellors and nurses when we got back, the choice was made to have the operation at SGH Singapore. For those whose prayers and faith had contributed to the success of her operation, we like to thank you including the hands of the capable doctors and nurses.

Below is a photo of her playing the piano in Singapore a day after the operation where she will stay with our Singapore family, Uncle Yen Wei's home, during the recovery and follow-up period. 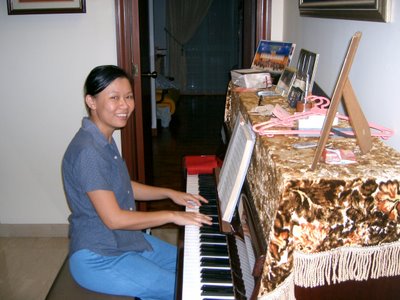 That is such a beautiful picture!!

Glad the operations was a success and 'mom' looked good.