Before and After the Storm of Bersih 5 Malaysia

On the eve of Bersih 5 of The Coalition for Clean and Fair Elections known in Bahasa Malaysia name 'Bersih' , I started to make my facebook post below and subsequent posts will follow. My support for Bersih started from a painful experience of Bersih 2 in 9 July 2011 shared in an old blog post of mine found here.

Following my new style of reporting on events using facebook posts on my blog posts, I would advise readers who want to follow more details of my coverage, to see more pics,videos or commentaries, to click the icon for comments of the facebook post found at the bottom of each post. Using this new shortcut presentation method is to help me save time for my work on getting my first book finished and published soon I hope as it takes a lot of time, talent and hard work to write a book!

The video below shows the early activity of the Bersih members on the night before the official date of the Bersih gathering at Dataran Merdeka :

As the Bersih marchers could not access into Dataran Merdeka, a new place of gathering was decided by the Bersih leaders to be at KLCC. The video below covers the crowds of people gathered at the KLCC. It caused me to be emotional, having tears running down from my eyes. Click here to hear my emotional moments in the video saying, "58 years old, born in Malaysia and I never expected to live to see this day!"   In a postdated video of 2 years later when the14th general election was held, click here to see and hear the voters expressing their emotions when the results were out to know the ruling party of the past 61 years had lost! 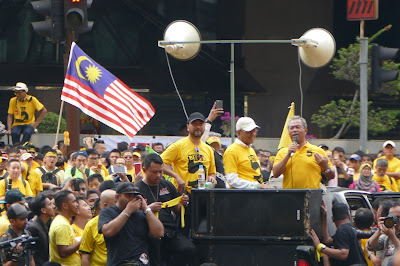 As a blogger, I wrote a blog post some time back entitled, "Little America in MALAYSIA". It seems that on this day, I saw the fully reality of it!  There are however some slight differences as shared in my comment below :

A good Live coverage of Bersih 5 with a progressive timeline of photos and videos throughout the day can be viewed by clicking here.

Malaysians overseas did gather too as per this photo sent from my friends in Melbourne Australia getting ready to join their peaceful demonstration groups there. 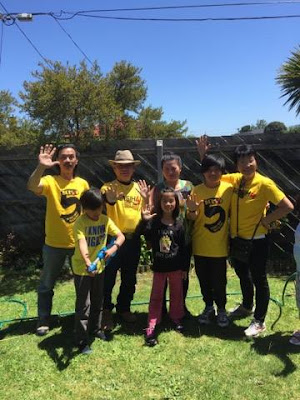 Postdated photo in 2018 by my patriot buddy who had a chance to meet with our common hero: 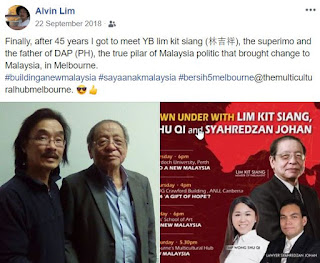 My pic current to the date of this journal post in Nov 2016 in a virgil for the freedom of Maria who was jailed before Bersih 5: 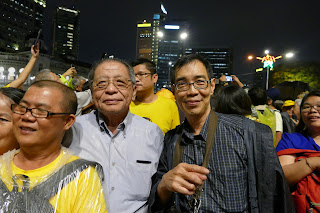 Maria Chin has been confined for 4 days already on this date by the police. A vigil for Maria started yesterday and will continue until she is freed.

My facebook profile photo was changed from the one earlier wearing the superman outfit carrying the Bersih 5 banner to a new one below :

After 10 days of confinement, Maria Chin was freed on this day. Touching moments are recorded in the video below when she appeared to the crowd in Dataran Merdeka who have been gathering there nightly as a vigil for her.


Great to hear the new government leaders led by Dr. Mahathir singing loyalty to the country and its citizens with a "MalaysiaBersih" logo seen at the end of the video! 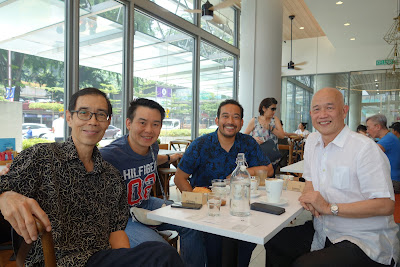 Transformation Project of Building and People launches for the Bukit Bintang community area in Kuala Lumpur with Bukit Bintang Foundation and KL Society.

2 March 2020
New government take over in Malaysia, a 'backdoor' government not elected by the citizens but members in Parliament from one party jumping over to follow Muhyiddin Yassin.
16 August 2021
Click here to the journal that explains how Muhyihddin Yasin was forced to resign as Prime Minster as well as the whole cabinet of parliamentarians he had pulled to his camp to become the de facto leader on 2 March 2020!
Posted by Dad the KL city kid