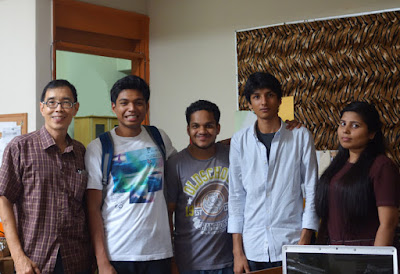 On your birthday today, I am in our KL apartment where I have been busy since the start of the Lunar New year of the Monkey to pre-launch our new Talklane media. In the pic above that I took with some of our support team members, you can see the notice board in the background with your tiger marks created by you for me many moons ago using your interior design talents.

There are a few co-incidental events that happened in this apartment that relates to what happened on your birthday 2 years ago in 2014 when I was in Kuantan recorded in this post. It was first feeling your presence in the Kuantan room I was in during the time I was deep into solving the missing MH370 mystery that had occurred earlier on 8 March 2014. Later when I got back to the KL apartment, an insect experience occurred which was shared in the same post. Well two years later last month, around the same week of the disappearance of MH370, I had another insect experience in the KL apartment as recorded fully in this latest post with videos. Have you been part of these afterlife signs??

Just another co-incidence occurred today when one of the team members mentioned he was interested in self defence and I brought up my 'Nunchaku' sticks. He wanted to take a photo of me with them and I told him I would refer an old video of my performance with the sticks during a last talent night performance of our family before the move to Singapore in Dec 2006 as seen below :

In my letter to you last year on your birthday, it mentioned about the passing of Lee Kuan Yew. Later in the year I made a historic trip to China where I found my ancestral village as shared in this spiritual journal.  In this trip, I got immersed into the history and culture of China like never before probably due to my extensive research in past years, with your help as recognized in this video, before making this unforgettable trip.

As I was playing the above youtube family video, I coincidentally came across this video about two American authors sharing about the book, "Lee Kuan Yew: The Grand Master's Insights on China, the United States, and the World" seen below :

I thought it was interesting due to my deeper interest in China and especially after doing this video interview below with the country manager of DBS bank in Singapore :

I made this video early in March when I was in Singapore to be at Ern's graduation shared in this journal post.  The boys are doing well and we did our Chinese New Year closing ceremony as in past years shared in this post. The girls are fine too and of course we became grand parents with Su's first baby girl who carries your name!!

We love you and miss you very much.