Happy Birthday to all November babies!

With all the October celebrations over, the November month rolls in to celebrate the remaining birthday of our two boys Woon Ray on Nov 2 and Woon Shuan on Nov 8.

We also like to wish all the other November babies Happy Birthday :

Below are photos of some of the celebrations that I have photos of or stories/memories to randomly share :

Ray's birthday is an exciting time to look forward to as it is the special day each year to judge or announce if he can break the record as the only child who could beat his father in height! Talk and some action to make measurements already started in October as shared here.

Well the 'Day of reckoning' came : 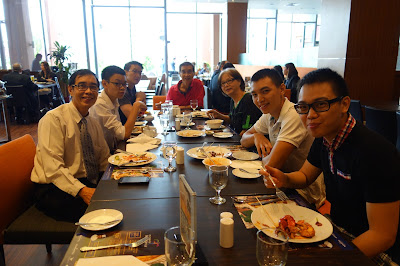 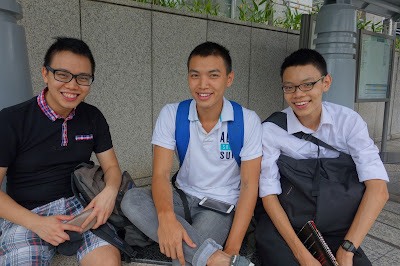 Two of Ray's siblings would be present as witnesses 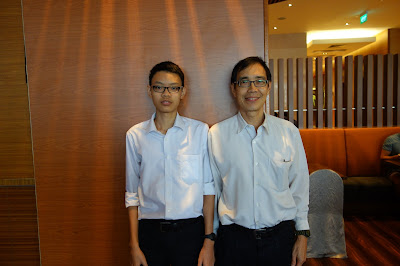 The photo was snapped at the hotel, with our shoes removed, where we had our lunch. Has Ray grown taller than his Dad? When shown to all the rest, the judgement or decision was "No quite yet!" My response to Ray was that he is only 18 with some more growth possible though it would be declining and he had to eat more or not skip meals as I've seen him do when he was too preoccupied with his computer, a common scenario for the next generation and even the next next generation where we can see it happening already today.

A joke shared to me on the MRT from a young couple about how in the old days the parents would be nagging the children to focus on the meals as they were playing games on their phone. Today the same parents are seen neglecting their meals as they had learnt 'WhatsApp' and are busy sending photos or news to their friends through 'WhatsApp', the most common Apps that the older generation are excited about! 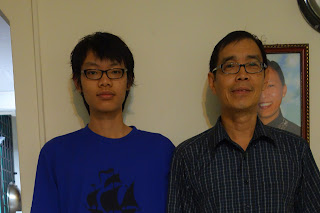 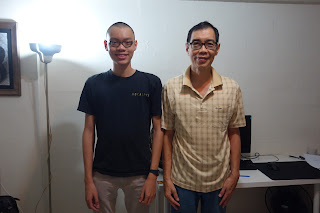 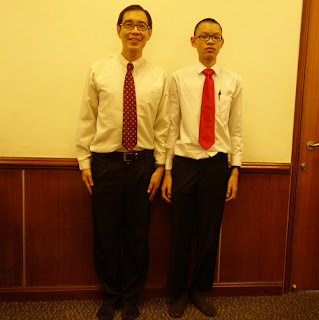 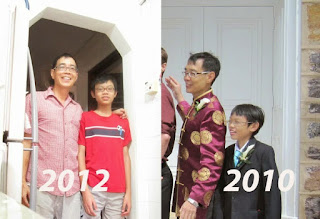 Fun pics from the past to show rapid growth of Ray in height. 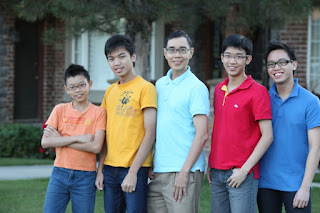 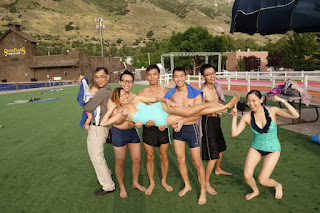 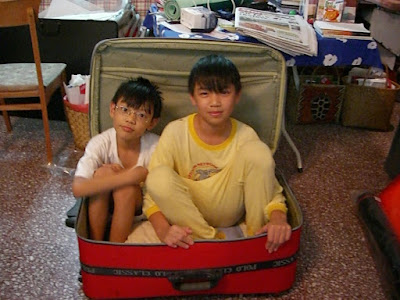 Ray may not taller than his father this November month but compared to the year he packed himself to be in Singapore recorded here, i.e. at 8 years of age seen in the above photo with his brother Ern in 2007, he has certainly grown much taller today! 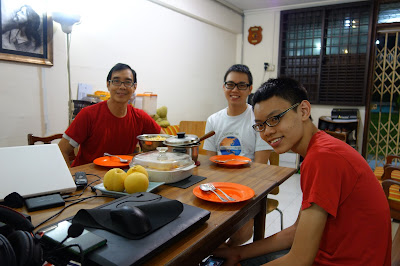 From 3 of us for his birthday dinner, home cooked Italina Lasanga and Spaghetti... 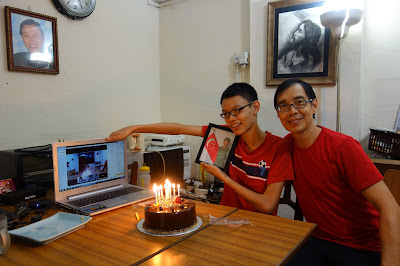 ...only the father and son was left as Han had to return back to his campus for some urgent homework, Ern(represented by his army photo) could not be back as it was Monday night and he did not have time off from his National Service duty while Shuan was in Malaysia for his driving lessons with the two girls in the US but they could be present online in our usual google hangout get together to chit chat and sing the Happy Birthday song for Ray!


Nov 5
I am blessed to be able to keep in touch with family and friends since my childhood, youth to adult age and one of them is Joy Williams, my landlady in days when I lived in Geelong Australia during my university years. I only learnt that her birthday is today after connecting to her through facebook during my last trip to Australia in the year-end of 2014. 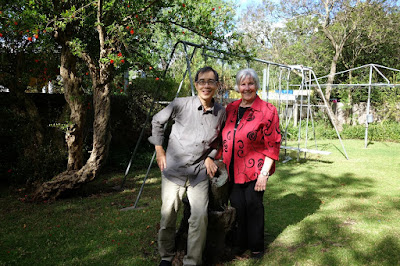 Here is a recent photo of us taken in the same back garden of the home I used to live in as a student in 1977 to 79, sharing with other students from Deakin University in Geelong.

After your 21st Birthday, I guess any other birthday after does not seem to have the same level of excitement. Let's roll back in time to compare on Shuan's 23rd birthday on this day! : 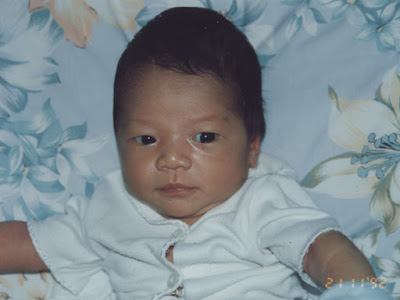 His birth itself was more exciting than any of the other children as shared in a blogpost account found here. 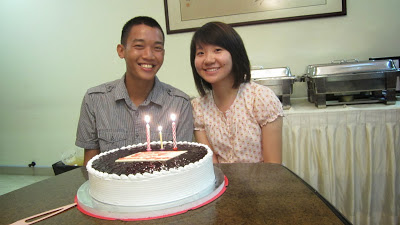 Very quickly he turned 21 in the year 2013 and got to celebrate a joint-birthday as he some times does with his cousin Ying Er whose birthday is on 11 November as shared here.

But for his birthday today in the year 2015, not only is there no photograph taken like all the other years, there isn't even a birthday cake to celebrate his birthday when the family gathered online with him to celebrate his 23rd birthday like for all the other boys who are still single or unmarried. Perhaps after one turns 21, there isn't an important birthday to celebrate until he or she hits 60th 70th or 80th or older birthdays! I guess this happened to the older girls and his older brother too. The girls were still in the US and Han was on his mission in Manchester UK on his 22nd birthday on 19 Oct 2012 at the time when his Mom was already critically ill earlier in October month on my birthday, recorded here, till her passing on 6 Nov 2012. 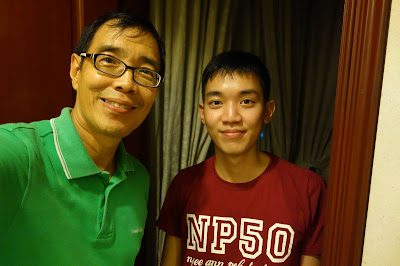 This was the only photo taken of him a month before his birthday when he was over there to help out his uncle in Kuantan. What happened?

Well I am the one who does all the photography on their birthdays plus getting their cake too and after Ray's birthday, I had left Singapore, planning to visit him in Kuantan on his birthday but he ended up going back to Singapore before I could visit him. At the same time, I also had a visitor from the US in KL for the week so I could not return to Singapore to celebrate with him but only join in the family online get together for his birthday. Problem is his birthday fell on Sunday Nov 8 and so it was not conducive for anyone to buy a birthday cake for him on the Sabbath day! Online, he revealed to us that he had a cake with his cousin Ying Er when he was at their home to do one of the joint celebrations again with her as done in some of the previous years! 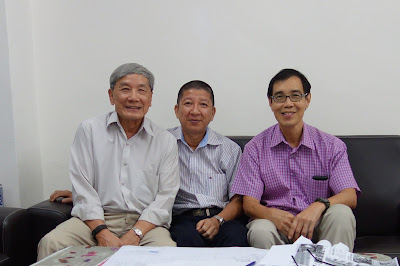 Here is my frequent visitor from the US to KL, Anthony Seow, on the far left with our mutual KL friend Ong in the center. Uncle Tony as our children would call him has been a long time friend and business associate since 1988 when I first visited his business office in LA as per this reunion blog post that I was inspired to create to recall memories. 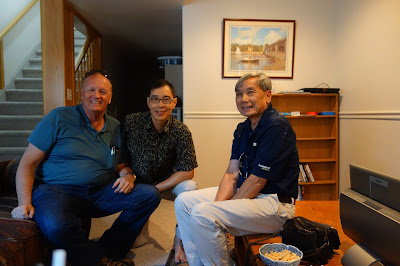 I was with Tony too in US earlier in August of 2016 with our mutual Utah friend and my business associate Cevin Ormond on the left.
Time Travel to
November 2020
2nd Nov
Birthday of Ray celebrated in Singapore on Zoom Meeting only due to COVID-19 pandemic 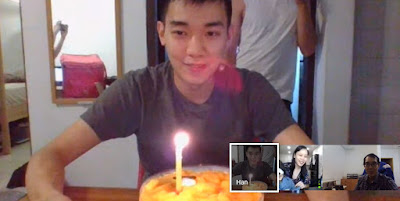