The Happy Chinaman in JB with his van and soup kambing 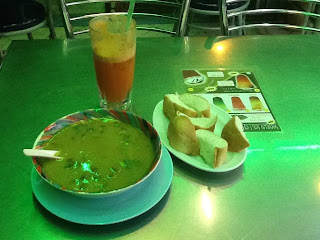 It's about me having soup kambing in Johore Bahru (JB)


As a Toastmaster, there is always a story behind every photo and here is where I share it :

JB is involved because that is where I would park my car if I were to have an extended stay in Singapore. As a Chinaman, and I am unashamed to call myself one since I heard recently that future American presidents now have to speak Chinese in order to talk to debt collectors, I try to save money by parking in JB as the cost of having a car per day in Singapore if you include the daily car permit cost, parking cost, ERP Electronic Road Pricing cost for passing a gantry on some roads and not forgetting the cost of occasional fines for not putting a new parking coupon on time after the old one expires, comes to about SG40 or RM100 per day!

To minimize the risk of having a vehicle stolen, I chose the oldest and ugliest looking vehicle with me ie our old family van that used to bring the boys to school, thinking no one will ever want to steal it. I kept it as it was useful to carry my motorcycles, bicycles, boat engines, camping gear and household furniture whenever required. Well a thief did steal the van as reported in the facebook post extracted below.  When the van came back into my hands, it was not in functional order as the engine gaskets were burnt, locks on the door and windows were broken and some body damage too.  I found a reliable mechanic through a friend's recommendation and left the van with him highlighting that he could take his  time to fix it as I was in no hurry to use the van as I had other vehicles.

Almost a year later, the van was finally fixed to have the engine in good running order. The mechanic explained it was difficult to find parts for this imported van.  Late on a Tuesday, I went to pick it up and as I hit the highway to KL as it was getting dark, a rear tyre burst and I had to pull the van aside to call AAM service as the spare tyre under the van was found to be missing. The van was hauled on to the truck and the driver drove me to the perfect place where there was a tyre shop with a hotel close by and near the hotel at the corner was a 24 hour Mamak or Indian Muslim restaurant. Within walking distance was a Karaoke bar too. Well after I had checked into the hotel and had my soup kambing at the Mamak restaurant, the hotel bed was the main attraction for me. I was at the tyre shop the moment they were opened first thing in the morning and after purchasing two new tyres, with the extra to be used as spare, I was on the road again. I knew everything ahead would be fine as I rolled into the petrol/gas station and saw that unknowingly, I had rolled into pump No 7, my lucky number! 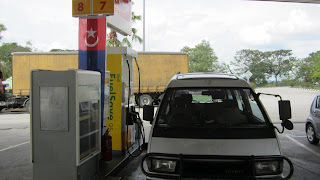 Despite the night's ordeal, this Chinaman was happy as the tow was free under AAM agreement including the hotel accommodation. The delicious soup kambing and apple carrot juice was reasonable at less than SG3.00 or RM7.50!


Listen to another Chinaman speak in America. If the above video cannot be viewed, click here.


Below is the facebook post I made on 10th Sep 2012. If you click on the comments link below you will see photos I posted of my affirmative response to a friend that suggested the van has become an adopted member of the family!