Moving on with Life .... in Singapore.

7 Dec today is already a month past in time when the Funeral Service and Wake began for our beloved Mom of the family. I'm still thinking about her, have been doing it the whole past month, and last night was tempted to put together one more video clip, being the final departure which brought back tears to my eyes :

I purposely left the last part of the video with it's original audible sound of sorrow and cries of sadness as we bade her farewell for the last time at the Mandai Crematorium. They are sweet tears. It's just like me to watch a touching scene in a movie, usually watched only on a plane when I have nothing else to do, to find myself with wet slightly red eyes, trying to avoid the stewardess serving me dinner!

I go to bed each night with my prayers to Our Heavenly Father and in my mind, as I talk to him, I feel she is in his presence listening in. I see her with a pleasing smile, contented and seems happy the way things have gone by since she left us. I do even talk to her, in my mind, some times in the middle of the day, asking her of her opinion if she thought such and such a thing we were doing at home was pleasing in her sight. Maybe the virtual world of the internet, communicating to people and feeling them when they are not physically present in front of me, has gotten into me!!! I must admit, some times my imaginative mind do often get the better of me but most times the experience has been a positive one. Perhaps that is why in my work, I do teach others about the power of Creative Visualization as a problem solving tool that we can use!

After the funeral was over, I'm glad our two girls stayed for awhile which created bonding time for our family.  They were also very helpful to help clear things at home and made sure us boys could be organized without a woman in the home anymore! They threw old stuff and some old furniture away and even got us new ones. 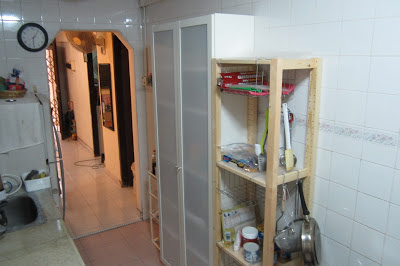 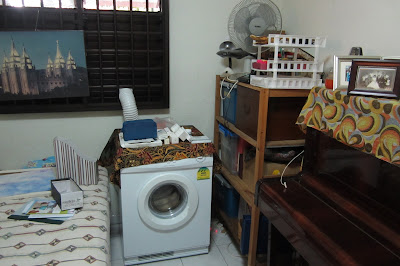 The even arrange with their cousin to have a dryer in the home so no more worries about rainy days and not having enough clothes for us boys to wear! haha! 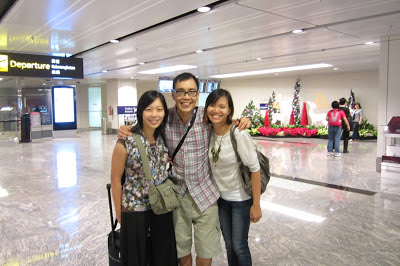 Soon, I had to say goodbye to them too and wished them well in their life in the US as I continued on my own with the boys in Singapore!

Though I've been in and out of Singapore most of my life with my work base in KL, not living on the island permanently enough, I have wondered if I can survive in Singapore? It seems so competitive and expensive as many citizens have been telling me whom I've met often in JB as they spend their money there! I know the boys could and have done well to adapt and even be successful. Though being close to Malaysia by distance, the island does have it's own distinct culture,values and benefits as I have observed here. In the link given, I had shared a couple of videos of the man behind Singapore, Mr Lee Kuan Yew, who had become the world's longest-serving Prime Minister. The videos are interesting to watch as there is a  black and white recording of him with the press in the US in his early years. His sharpness in his younger days is evident in that clip. The other is when he retired and met up with the local Singapore press in a series of interviews that has been collected to publish a book. 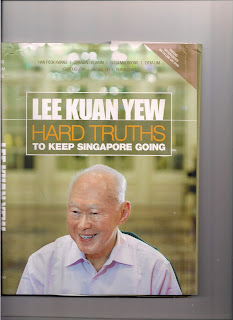 How coincidental that in my trip to Singapore, during the last two months of Mom's life that required me to give intensive attention to her, a long time friend just gave me the above book to read! 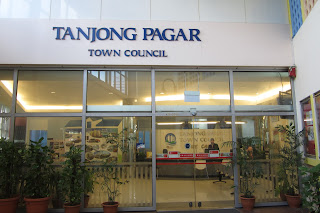 Interesting that in arranging the funeral service, I had to go to the local council office to apply for usage of the multi-purpose hall. It was only then that I realized our home was in the political constituency of Tanjong Pagar that belonged to Mr Lee Kuan Yew himself. 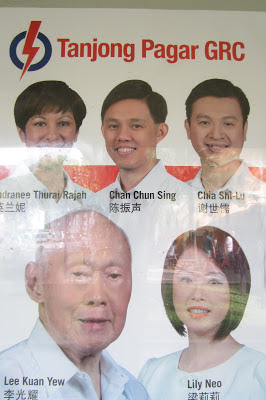 The Tanjong Pagar Group Representation Constituency is indeed a famous one in that besides being the stronghold of Mr Lee himself, apparently many previous Members of Parliament of the GRC had "cut their political teeth here and went on to become ministers in the Cabinet" as noted here.

In the poster that I captured above from a glass notice board, I could remember the lady on the top left named Indra Thurai Rajah. It was the December Christmas month in 2010 when she was the guest-of-honor in a community service project for old-folks in the Henderson community center that our Church had sponsored where Mom was involved in storytelling to entertain the old folks. 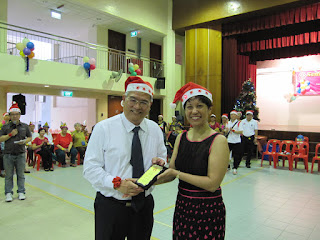 Here is a photo of her presenting a plaque as a token of appreciation to our Church for it's contribution to the event extracted from the bottom of the blog post found here.

That was the first Member of Parliament of Singapore that I had met close up and little did I know that I would meet another due to Mom leaving us. Mr Chan Chun Sing happened to drop by at Mom's wake in the multi-purpose hall that I had applied for usage to convey his condolences. I did not get to meet him but Mom's niece Claudia informed me about it later. He had cordially mentioned that if the family needed any help, we could see him personally. This we did the following week in what is known as a Meet-the-People-Sessions.

Claudia and her husband brought me to the meeting place on a Monday night as per the published schedule. There was a small group of people also seeking to meet the MP. After registering to get a queue number, we waited for our turn. The place manned by a number of volunteers and when our number came up, we met first with an experienced volunteer who would take down the details of our case before meeting the MP. Our plight was that the remaining children under 21 who have been attending school in Singapore now do not have a mother living permanently with them. As the father who is Malaysian, I would need a long term pass issued by the ICA in order to live with them in place of their mother. Soon the MP Mr Chan Chun Sing appeared and after being briefed of our case agreed to get a letter out personally signed by him to be forwarded to the ICA to support my application for the long term pass.Within half an hour after meeting with the MP, the letter was given to me. I was totally impressed how efficient the whole system was and how hard working the MP had to be to help the people, even a Malaysian husband of a Singaporean wife!

I did go to the ICA building to submit my application for the long term pass with the support letter by the MP. I was told the process will take 2 to 3 weeks. Meanwhile my visitor's pass would be running out as I was coming close to the maximum of 60 day limit allowable for me to remain on the island. They approved of an extension of a temp visa for another month plus but it would be valid only for a single entry, meaning I cannot leave the island as on return, the extension visa to stay in Singapore would be invalid.

Due to my confinement in Singapore until the long term pass was approved, I created the video clip message below to my KL Toastmasters club who were expecting me, as the past president, to attend a 25th Anniversary dinner event.

I read your posting and listen to the hymn and a song, from Geok Lee's favorite musical group, with tears in my eyes. My deepest condolences to you and your family.

Thanks Irene. You've touched us just as much as she has touched you with your always kind thoughts and feelings shared with us from your heart. Right now we're watching very closely the progress of Lian, waiting for the announcement of the birth of her baby. We're so excited for her and you as the grandma. She is going to be a great Mom!