Dad, punched up and taken Hostage in a bus???

A police report (THSL/018475/08) was filed at the Jln Bandar (H.S.Lee) Police Station in the Dang Wangi district at 9.06pm on Saturday 7 June 2008, 4 hours after the incident! The photo below is taken by Dad's good friend Mr Tan Tek Seng at the police station. He responded to Dad's call when I got free from the bus and brought me to the police station and later to the UKM hospital for treatment. 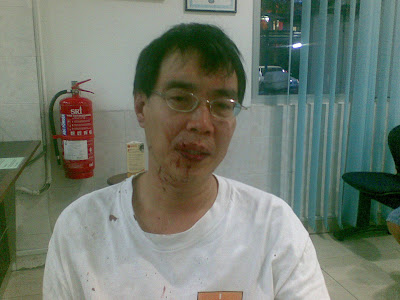 Here is the full story:

Dad had purchased 4 tickets to Singpore for the boys on Friday night from KOK Agency Bus Express at their kiosk (Tel: 03-20319378) outside the Pudu Raya Bus Station, for a bus leaving Kuala Lumpur at 3pm the next day.

At about 2.50pm on Saturday afternoon the next day (7 June 2008), I drove the boys to the Pudu Raya area and dropped them off at the same kiosk to check for details where to board the bus. I left the boys to board the bus on their own as traffic was heavy to park the car and proceeded to drive back home. Just as I was reaching home, the oldest boy Han called to say the Bus would be late due to a tire puncture reported by the agency. After a quick change, I headed back to the Pudu Raya Bus Station to find the boys waiting for the bus in front of the Maybank building.

After waiting for almost an hour, the first sign of trouble came when a Malay man with walkie talkie shouted rudely at us for waiting at a 'wrong' place but who knew where the right place was when there was no designated waiting area in the first place. I remarked that he was rude to treat his customers this way and proceeded to the kiosk to make a complaint. A plump Chinese man with glasses responded very kindly to me and apologised and I didn't think much of the matter after that.

At at almost 5pm, 2 hours after the original departure time, I walked to the kiosk to find only a Malay lady and asked her if the bus was really coming and for a phone number of the bus driver to know exactly where the bus was. I knew it was common that every bus driver had a cell phone for contact on the road. She gave me the number as 016-2267511. I thanked the lady for her assistance and actually expressed to her that the agency had been very good in their service to me. I therefore took a photo of her at the kiosk as below but she was a bit shy : 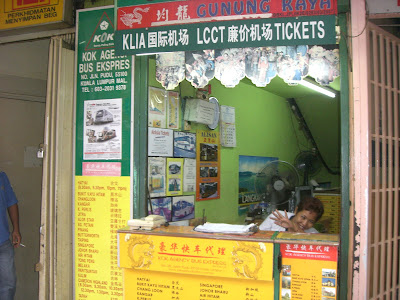 When I called the number, it turned out to be a Chinese man with the bus company who was also at Pudu Raya waiting for the bus too. He seem agitated that I had called and that was the second sign of trouble. I saw a Chinese man in black waiting in front of the bank on the isle dividing the bus lane and figured it was him.

Finally the bus KBB 9998 with the 'Trans Star' name finally arrived about 5.10pm which stopped infront of the Maybank building. The man came to the bus at the entrance door while the boys were waiting at the side. I just asked the man if it was ok for the boys to go up the bus and that was when he gave me an angry stare as if it was a stupid question and I urged the boys to go up. I brought out my camera to take a pic of the bus but this man got angry and told me not to do so. Further he told me not to go up to the bus and proclaimed loudly, "I am the owner of this bus and will not allow you to enter!" Now I always carry my camera around and had already taken a few pics in the area as the pic above and below : 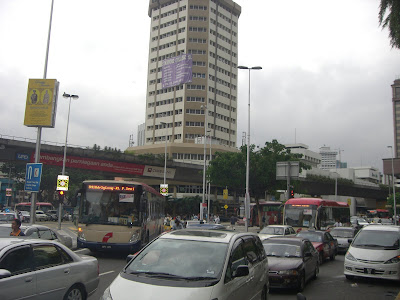 After I saw the man was busy talking to the driver, I stole the chance to get into the bus to see that the boys were well settled down in the bus. I said our good byes and as I walked to the front of the bus I saw the man outside and took his photo : 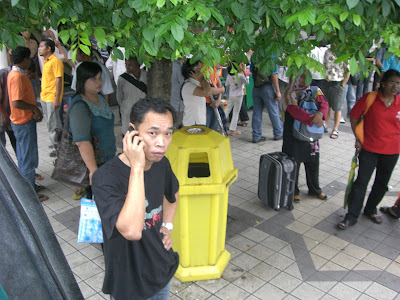 As you can see, he was looking right at me and immediately after I took the pic, he rushed up on the bus to attack me in the bus. I was knocked down further by 3 other Malay guys working with the bus, one who was the assistant driver who sleeps on the left front of the bus, the other the driver and one more Malay worker! I was pinned down on the floor and they punched and kicked me on my face non stop resulting in my glasses broken, camera and my cell phone snatched away from my hands!

After that I was let go and while I was recovering from the shock I realized the bus started moving. I sat up by the driver's side and asked for my glasess, phone and camera but he said it was not with him. I then asked that he dropped me to the nearest police station to make a report but he responded that he would take me to the JPJ office instead and I wondered why. Now I was a hostage in the bus as he wouldn't let me off any other place either! I proceeded to the back of the bus asking for witnesses of my attack but not one of the passengers there were willing except of course my own children who witnessed the attack.

Soon the bus stopped and I looked out to see that it had stopped by the BP petrol station on Jln Maharajaleela. Then the same Chinese man that attacked me came to the back and offered to take me to the police station. My instant reply was that no way was I going to go into the car with a man who had just attacked me and refused blatantly! At that point in time the boys decided to get off the bus with me and we went into the office of the petrol station. Another fat Chinese man without glasses who apparently worked with the bus company tried to pursuade me to follow him in the same car to the police station and I refused. Soon they all left and I called my friend to find me to take me to the police station.

The boys managed to catch another bus on Sunday night at 9.30pm without any incidents. 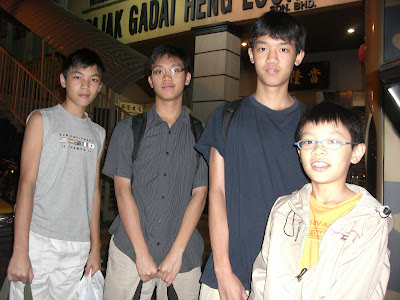 It is now left to me to work with the police, the press and my lawyers to bring the man pictured below to justice : 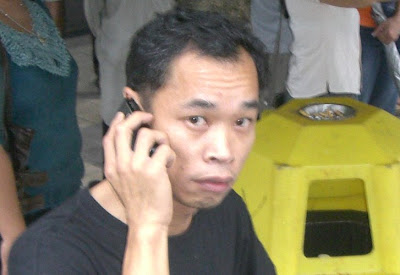 With a little bit of effort, I managed to get the news out to several papers for public awareness. Here are some of the copies I found published or of which friends have posted to me : 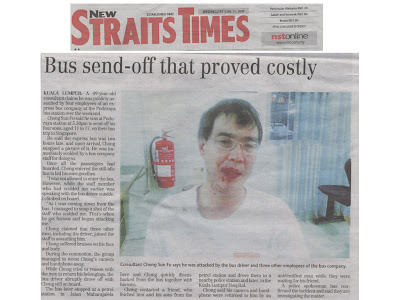 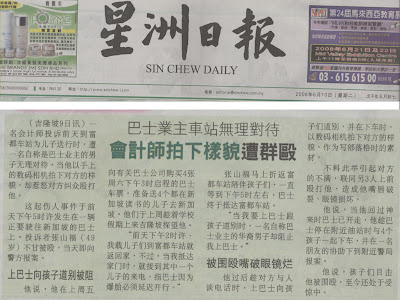 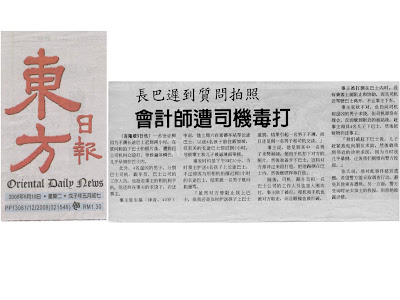 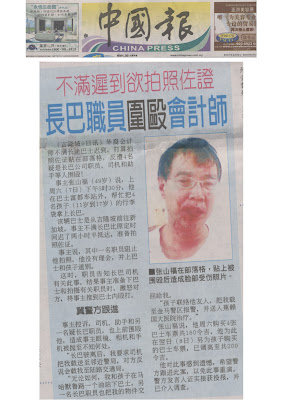 The work is left to the police to follow-up and the station where I made the police report is pictured below: 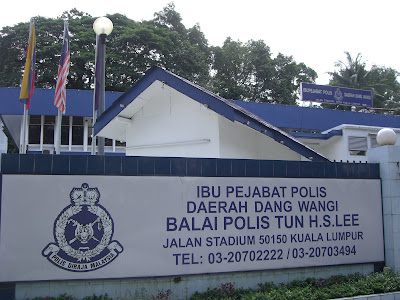 I am sorry. The recent gasoline price must be getting into bus operators' nerves as well but definitely the unjustifiable way to treat customers! Glad they didn't hurt you further and that you got your camera back, to share with us the pictures you have taken.

Where buses are concerned it is between heaven (Singapore) and hell (Malaysia)!! The powers that be in the peninsula are more concerned about enriching themselves than about the man on the street. So that is why our public transportation is not properly regulated, from taxis to buses to trains!! I wonder whether there will be any changes after Badawi boarded KTM the other day - he is more worried about his political position than anything else presently.
I am so sorry to see and hear about the violent shaking you have had with these hooligans. I know the condition at Puduraya and as you would have read about them, there have been countless complaints to the authorities but not action done and this has emboldened the bus & taxi people, though not all in the basket are bad.
I have been able-bodies men pull down old folks (by using their bodies t push and by pulling the old folks' hair) in the every-day occuring no-courtesy very Malaysian rush up the bus. Let us pray for a better government for a better public system!!