Our family tradition is to have a tea ceremony on the 15th day of the Chinese New Year to have each child kneel before the parents to give a verbal wish to the mother and father individually. Following each verbal wish, the child would serve a drink(herbal tea, orange etc) in which he would get a red packet or 'ang pow' containing money from his parents.

This year, because Dad came too late from KL on the 15th night and some of the boys had slept, it was done on the next day but still considered on the 15th day, according to American time! Dad lives on with his motto, "Better Late than Never!" 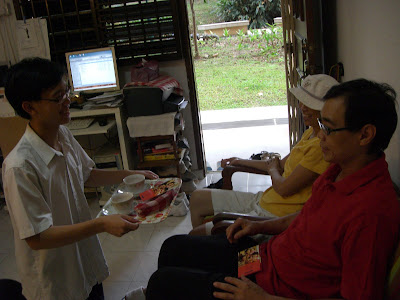 The oldest present, in this case Han, prepared the drinks and was the first to give his wishes. 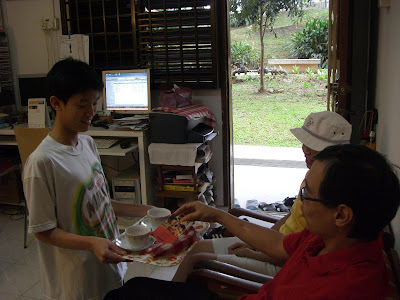 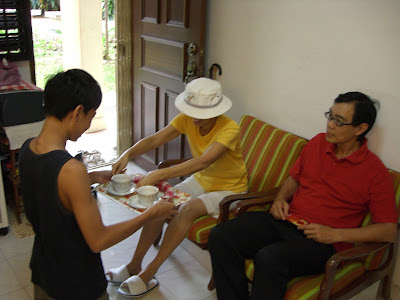 Mom receives the cup of drink after hearing her wish from Ern. 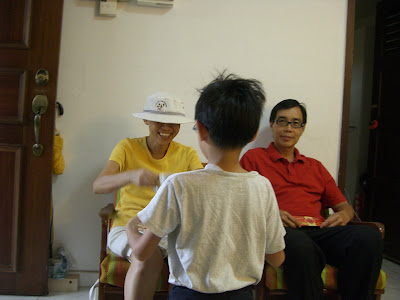 Last is Ray to give his wishes. 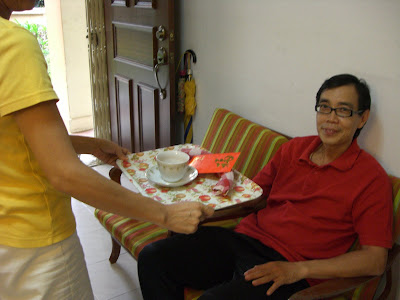 Oh... Mom gets to give a wish to Dad too and receive an 'Ang Pow' as well!
Before you continue on with the rest of the year, you must listen to the last lecture of Professor Randy Pausch at http://video.stumbleupon.com/#p=ithct48cqw

Post dated comment :  I discovered in Feb 2011 while finishing the Chinese New Year blog that referred to this post to discover that the link to a video of the last lecture above did not work any more. A new link that works is now found here here . Coincidentally I had started off the year 2011 with a post on the 'Last Lecture' by Professor Randy Pausch. An overwhelming feeling came to me that I had picked up the video in Feb 2008 when Randy was still alive but forgot about it until 2011 to feature him in the January post as I had just finished reading his book. Randy had passed away on July 25th, 2008.
Posted by Dad the KL city kid