Su had received her mission call in a letter but would not open it without having all the family members and her friends with her. So the time was set for 1.35pm Malaysian time or 10.35pm Utah time for all of us to get online on the internet or be on the phone as she opened the letter in Provo. Dad was in Singapore while Mom and the boys were at home in KL and we got online. Fei joined us through the phone from Beijing.

It was 2.15pm by the time Su got connected and she asked each family member where they thought she would be sent. Mom suggested the Mandarin speaking mission in New York City while Dad and the boys said the Singapore Mission. At last she opened the letter and she read the letter to announce that she would be sent to the Mandarin Speaking Mission in Oakland and will also work at the Visitors Center of the temple. She should report to the Missionary Training Center at Provo, Utah on Wednesday, 31 January 2007. The exact content of the letter is typed out at Su's blog

Interesting that in February this year Mom and Dad was in the grounds of the Oakland Temple and wanted to take a photo of ourselves with some difficulty. Just then a pair of Sister missionaries drove up in a car to help us. We found them to be from Hong Kong pictured below : 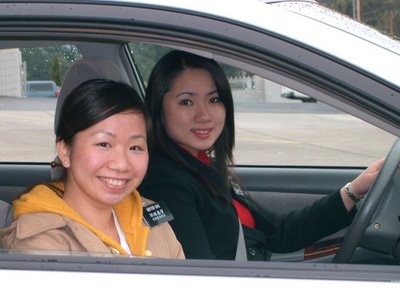 More pics found at the February 2006 post on this trip where we spent time with Su who was at BYU Provo for her studies.

Postdated event :  Her pre-mission and mission photos can be viewed by clicking here.

I am so happy for all of you. Congratulations!