What more is there in the M & M culture?

Not long ago a Malaysian construction company YTL won a major international tender in the UK for a power plant construction project amdist several other major international companies from more developed countries. The CEO Francis Yeo was therefore invited to speak to the London School of Economics. In his speech he shared his observation of the different cultures of the world with words to this effect :

"In America, they prize freedom and this is protected by the law and so to Americans, the law always comes first while logic comes second with relationships last.

In Europe, the ancient civilization is rich with knowledge and logic to the Europeans comes first while the law second and relationships last.

However in Asia, the people seem to prize relationships first, logic second and the law third!"

No wonder the world seems to have so much disagreement and it's all because of differing cultures! So what is this culture thing especially the M & M culture of our family? Well it's simply the behavior that we will gravitate towards because we were brought up being used to a particular environment which we call culture. So our family members who only left the country for further studies around the age of 17 would indelibly carry a part of Malaysian culture with them. Tolerance and patience with others different from us would be a strong feature. Of course there will be other outstanding traits like the way we drive or how we love to eat even in odd hours of the night and many other traits that one can point out. Those would form our perculiarity and identity through a sheer force of habit or what we are comfortable with.

Now when I joined the Church nicknamed as 'The Mormons' in the year I turned 21 as a student in Australia, I knew life for the future was going to be quite different. So part of that difference is the production of M & M kids, all six of them! As a young idealist and a mature one today, I must make the important comment that yes culture can influence us without us knowing it. However, it is our very own choice or choices that we make which determine what culture we will have. For me choosing to live in Malaysia while many of my contemporaries accepted lucrative positions or 'better lives' in more developed countries was a major decision. Why if I did choose to live in Singapore when I married the Singapore Girl, we would have produced S & M kids and that doesn't sound cool at all does it compared to M & M?

So what aspect of the Mormon culture rubbed off on us and our kids and will do so for a long long time? Apart from our religious beliefs, I think its just the way we have come to understand who we are. That we are children of God and everyone else is our brother or sister! By our choices, we strive to find a testimony or develop faith in a true and living God. As we allow ourselves to be guided by the Spirit of God or things which we regard as greater than our own physical appetites, there is a transformation in us to become perhaps individuals who have bigger dreams. Hopefully, our faith and testimony allow us to face challenges or failures better because the culture should help us value things that may appear as 'failures' on earth but are of real value and happiness to us in the long term. Yes, the culture of true Mormons who live in this world is certainly not of the culture of this world where the name of the game seems to be to get more and more, even oppressing others if needs be. The laborer is worthy of his hire and we should always work hard and smart to earn our reward and allow others the same opportunity.

Mormon beliefs and culture of the family and God that was once thought to be extreme in the past is surprisingly found to make more sense today and is being accepted by more people around the world, from New York to Mongolia and yes even in Malaysia. It has withstood the test of time and the fruits of those who believed and sowed the seed is now being reaped by a multitude of generations around the world. Our recent meeting in Kuala Lumpur at the Islamic Studies forum where a Mormon expert in the translation of Islamic text shared his work to highlight its inherent beauty is representative of our culture of understanding and appreciation of differences in others. (Photos posted below.) Yes we are certainly not 'Extreme' but very much becoming 'Mainstream' today as you can even walk to a commercial bookstore such as Borders in KL to purchase Mormon books and scriptures.

So boys and girls, for better or for worse, you are the M & M kids and I'm proud of you in a humbling way. You've taught me much as I've tried to teach you what I know about life. We never stop learning from each other so be SMART as our leaders have taught us. (Click here to see how to be smart!) 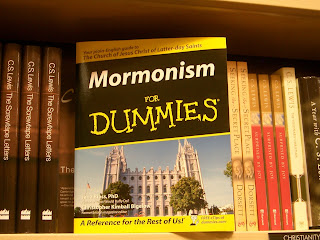 This is the book available at Borders 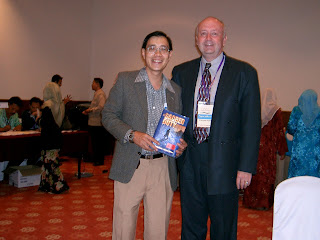 With the lawyer from Utah whom I happened to have a copy of his book entitled the "The Sacred Duty", Richard Wilkins. 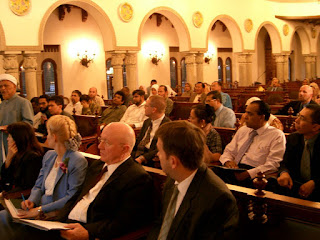 At the 2005 ISTAC Forum (Institute of Islamic Thought & Civilization invited by Richard Wilkins. 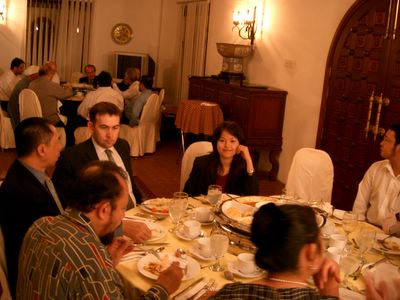 A nice dinner after in a beautiful setting

Post Dated Development :
Dec 2013 :  See how the M Culture has prevailed over the years in our family in a December blog post of a year in the future.

Apr 2014 : See how the M Culture has risen to catch the world's attention in a book by 2 Yale law professors entitled, "The Triple Package".

June 2016 : See how the M Culture continues into the 4th year after the passing of the Mom of the family in the family reunion in the heart of the Mormon land of Utah in this post.

We're heading out to the British Council to get some good books and ice-cream.

Ok and I'm heading to the plane. Actually, been very blur about you having to call US when I can call when I arrive in SLC at the proper time right??

Cheers to all of us!! We finally get to make it to be SMART hehehe