Easter Sunday, the Beginning of the Story.....


Today is Easter Sunday and we had a beautiful program at Church of words and music. It seemed like the whole branch got to participate in one way or another and it was inspiring. Shuan(12) got to give his first talk on the pulpit as a young man. Mom got to sing a duet with Sister Miller with Han(14) playing the clarinet and Michael Cragun as the pianist. Dad got to join the priesthood brethren to sing "He has Risen" and it sounded really good. Ern and Ray got to join the primary in their song presentation.

The family, after lunch, just finished watching the church DVD "Faith in Christ". We are about to watch a DVD that I bought at the Ampang Point shopping mall nearby our home, entitled "The Work and the Glory". Imagine, the history of the Church is now portrayed in the movies and other public media that one could buy from a public mall. We did watch the story of Elder Groberg's mission experience entitled "The Other Side of Heaven" in the cinema located in the mall of our Kuala Lumpur Twin Towers some time ago.

The Story of Christ, of his life and resurrection, is now widely known in the world. The Story of the restoration of his Church in these modern times is just starting to be known in the world. As the world talks about the "End Times" or time of the second coming of Christ being close because of the many disasters in the world such as the Tsunami wave in Asia, I think the spread of the restoration story is also a clear sign of the second coming of Christ drawing closer. Who could have imagined that a church that faced all kinds of opposition and ridicule in the past can today begin to show signs of becoming recognized as a mainstream religion and to be taken seriously?

I have a story to share too and perhaps this could be the appropriate time to publish it. Not in a movie or DVD media but simply in this blog that shares my personal thoughts, experiences and many things that are in my heart. It is a story of how I was called home to share the story of the restoration, to serve a 2-year mission for the Church of Jesus Christ. It is a true story that I cannot deny but rather has inspired me all these years to be faithful to Christ. I have kept it to myself for many years, only sharing parts of it with members of the church and family members when the spirit motivates and when time permits. From today onwards, I will release a detailed account of my story for I have logged it all in my personal handwritten journal. It contains true incidents of personal revelation, pure miracles and manifestations of the spirit interspaced between events that have become historic in the history of The Church in Malaysia.

Before I do that, however, I must complete the story of my courtship with the Singapore Girl! I will do it today and the forthcoming postings will contain my conversion story, the story of how I was called on a mission and the experience itself. I am not sure how long it will take to share it all and I will do it in parts as time permits.

Now back to the story of the proposal I think I made. Yes, I did use the words "I think". I am usually quite precise with the words I use in verbal or written communication. That is why I sometimes end up having a "block" in my mind, trying to get the right word out. Ok here is how the proposal went. We had a rest stop in Penang Island where there were lots of interesting places to visit. One of them was the Botanical Gardens where the beautiful gardens with flowing streams created a very romantic place. We stopped by a quiet place which looked like a wishing well and so I just took up some coins and made a verbal wish before tossing the coins. I wished that one day, we both could be sealed in the Temple!

Now I have to elaborate further about the culture then as well as some things I had told the Singapore girl right before I even started to really spend serious time with her in our courtship. This is necessary so that one would have a complete picture of why it happened that way and I guess why I think that was the moment of a proposal! I love this blogging method of writing your past now as I know the Singapore Girl would read this and make her comments. This way history can be corrected and if desirable, the writer could be chastised for errors...ouch! Guess that is another good reason to elaborate on the proposal issue as risk insurance huh? More on the proposal later!

Ang Huah, a friend of my oldest brother in Penang is an active guide who has been keeping in touch with me through Facebook messenger. He knew I had come to Penang with my brother and wife where we had first met shared in this video of a previous trip.

He invited me to join a group to hike up some hills from the Botanical Gardens to Moon Gate station 5 as it is called. 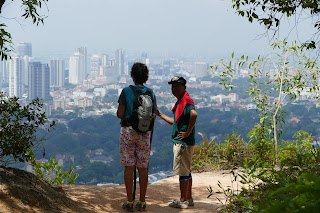 Ang Huah with a red cloth over his shoulder talking to one of the foreign hikers. 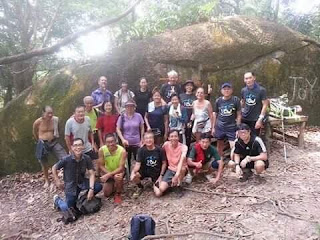 A group photo about halfway to Station 5. Ang Huah is seen with a red cloth over his shoulder squatting at the front 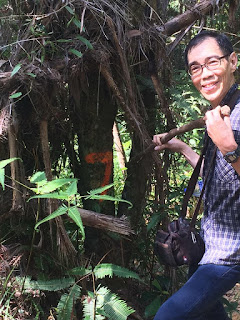 Close on our hike to Station 5, I saw the number 7 marker on a tree. See how my Story of 7 started! 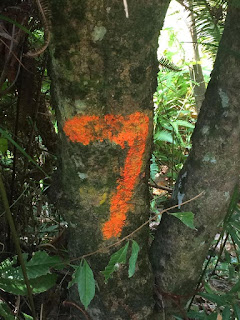 Finally, we reached MoonGate station 5 that has a flag flying on a mast 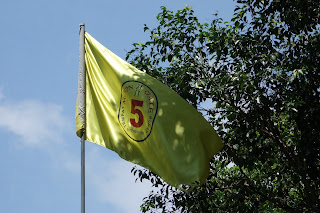 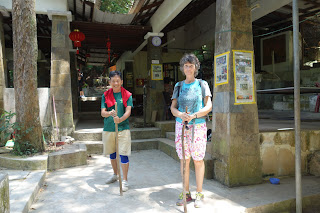 MoonGate station 5 was a sophisticated rest station with a kitchen, dining hallway... 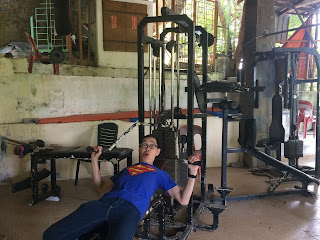 .....with an outdoor gym to further work out after the hike! 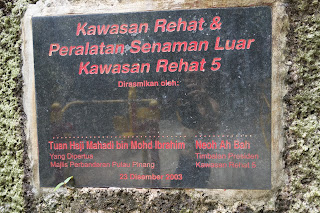 Here is a plaque of its opening 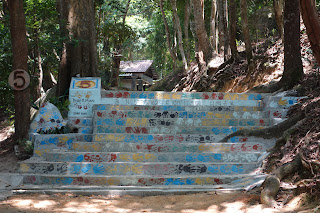 After a good rest, we started our hike back down to the Botanical Gardens car park.

At the car park, I saw two birds and took a photo of them. Seeing the two birds right in front of me gave me goosebumps as it felt coincidental that I was heading to the Botanic Gardens close  by to retrace the steps of 2 lovers who once came here in 1982 and here were like two love birds in front of me. 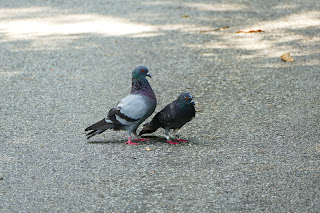 Something made me turn on the video in my camera to record a unique action of the two birds seen below:

After seeing these two playful birds, I was sure I was getting inspired to visit the Botanical Gardens nearby to find the trail where my wife and I first walked described above in my original writing when I first started this post in the Easter Sunday of 2005. 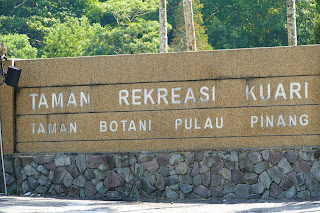 I started to walk the path I felt I had taken years ago in 1982. In a way, it was similar in a trip back to Geelong Australia that I made in 2013 where I walked back in a trail through a park that I first walked from memory in 1979 as recorded in this post. 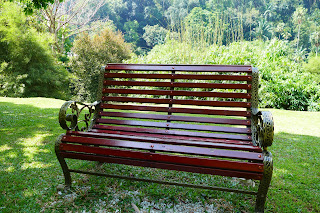 This looked like the bench we set down to have a rest under the shade of the trees. 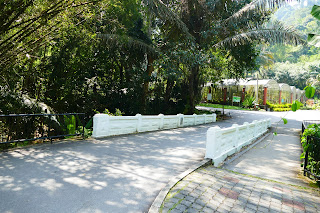 I remembered this small bridge where I could find a stream below... 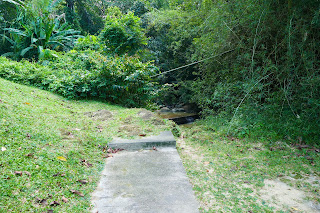 ...and I followed a path near the bridge that would lead me down to the stream. 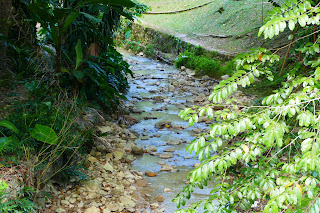 Yes, this was the place where it was the upper part of the stream with less running water... 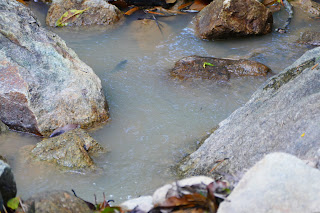 ...and we could walk closer to a part of the stream where there was a pool of water. I had called it a wishing well. I would quote what I had written above years ago:"We stopped by a quiet place which looked like a wishing well and so I just took up some coins and made a verbal wish before tossing the coins. I wished that one day, we both could be sealed in the Temple!"

NNNOOOO!!!! That's not the right version!

I have to get this straight...but not now...SO ppl, pls come back and check, if you like MY version, which is the more accurate version!

I am beginning to think that I am not the only one who writes a little bit too much in the family...

(winks at Dad and Jiejie)

It’s the start of the year 2022 today Han! Lots of water has gone under the bridge as they say! Your wedding will be coming up soon. The whole family is excited as the COVID-19 pandemic delayed your happy day! With love to you yesterday, today & forever!!!