Met a Real Nice Guy at Church in Melaka

Every now and then I run into someone interesting in my life, in fact, more often than not I would say as I have this love and curiosity of people since young that has never left me. The advent of Social Media in the IT world really was a 'hand in glove' creation for me and this was a recent post that I made, in the last quarter of 2013, in one of my shuttles between Malaysia and Singapore :

On one of my road trips from KL to Singapore, I caught notice from a dialogue on facebook of the visit of a General Authority of our Church to Melaka branch on Friday, Nov 8. I was pleasantly surprised as I wanted to attend their open house on Saturday the 9th but was not possible as that was the same day as the 21st Birthday celebration of our 2nd son Shuan. There was also on the same day, a Church farewell party for a very nice young American couple who were like angels to my wife and later to our boys after she passed away in Singapore.


Excited I quickly called Sis Pat Cheah, an 85-year-old sister, who would often get a ride with me and had booked me on this trip, as she visits and stays with her children on both sides of the border. I asked her if it was okay to make a slight detour in our journey south to Singapore to stop by in Melaka and she agreed. It was a busy day for me on my last day in KL to get my list of things done and was rather late to pick her at past 4pm to reach our destination at the time planned of 6pm of the visit of the General Authority. In my mind, I was wondering why would he visit a very small branch of our Church in Melaka but was grateful that he was to do so as it allowed me to visit the branch that I had always wanted to visit, since my last visit many years ago, but failed to do so!

Knowing that we would be late, I messaged President Tan, the branch president to inform him that we would miss the start of the meeting and would just come in before the end just to have a chance to greet our special visitor. When we arrived to the meeting house about 6.30pm after experiencing Friday night traffic leaving KL, on the highway and coming into Melaka town, I was surprised that the meeting had not started yet! I thought Melaka, having been named as 'Sleepy Hollow' in the past was living up to its name to start a meeting late Haha!

What a spiritual visit it turned out to be! Sis Pat Cheah repeated to me positive comments about the spirit that we both had felt and I'm glad we made that detour. President Gerrit Gong was one of the first to greet us at the door and welcome us in. The President Tan explained that the Friday night traffic was causing members to be late and so we ended up being early :)  The meeting was kind of a devotional led by our General Authority with the theme of 'Our favorite scriptures' which he shared some and got each one of us to read them. I was already touched by the first he shared ie from Doctrine and Covenants 8:2 "Yea, behold, I will tell you in your mind and in your heart, by the Holy Ghost, which shall come upon you and which shall dwell in your heart" Wow I felt! Heart and Mind is the central theme of my personal website with the Spirit as well.

After the meeting, we got to chat with Sister Gong. She explained that President Gong was invited to the Multimedia University in Melaka to meet the chancellor and other authorities there to assist them in making the university to be at the top league of universities in the world one day. It was a last minute notice given to the Melaka Church to organize this devotional meeting and I'm glad I caught notice of it through Facebook! His distinguished profile can be read here.  Besides being the assistant to the President of BYU, an educational institution, President Gong was also special assistant to the US ambassador to China where in his talk, he mentioned he had actually partnered with the Ambassador in a game of ping pong with the mainland Chinese players, as part of the 'Ping Pong diplomacy' that began earlier in President Nixon's era which led to the restoration of Sino-U.S. relationships which had been cut for more than two decades.

The following pics were taken at the end of our warm friendly gathering in Melaka in a meeting house with the address 7777 Lebuh Ayer Keroh! : 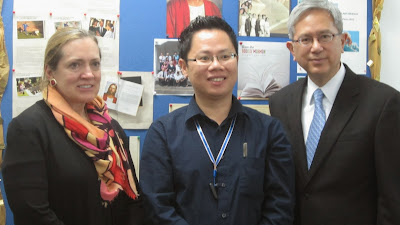 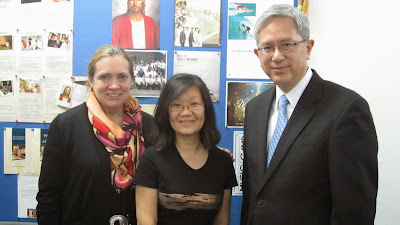 Got to meet this new sister Samantha of 3 years in the Church with the Gongs. 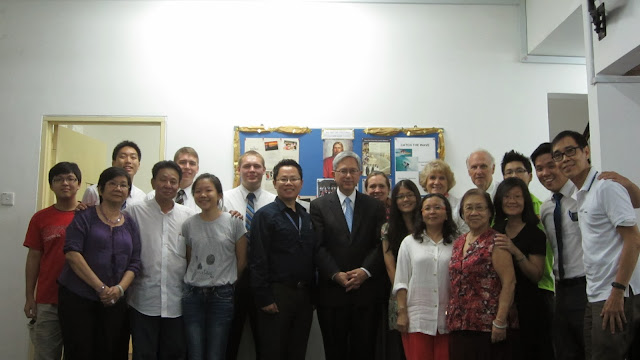 Here is our warm friendly group of latter-day saints in Melaka that night, the oldest being Sis Pat Cheah of 85 years of age and looking good! 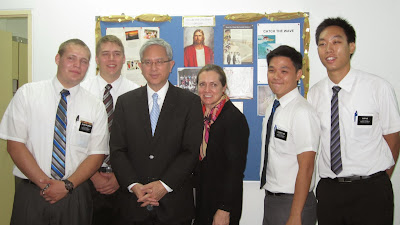 Our full-time missionaries in this photo

It was a great pleasure to meet new Elders, Shorts and Holbrook from the US as well as local ones that I am familiar with! Elder Lee on the right was from our family ward in Clementi, Singapore before it divided. He is the son of my former missionary companion John Lee in our Singapore Mission days of the early 80s. Next to him is Elder Tan from the Puchong branch in KL area that I had also had a chance to visit some time ago. I knew that the Puchong branch had the largest group of young men in our District and was pleased to hear that the following persons are now serving or just called on a mission for the Church of Jesus Christ of Latter-day Saints! Kudos to these valiant young men and woman, all 7 of them from Puchong Branch!!!

Elder Gong in March 2018 was called to be an apostle and his profile given in the link above should be updated with the latest here.